Despite Apple’s traditional reluctance to implement wireless charging on iOS devices, the dream continues to live on. The notoriously unreliable DigiTimes, an Asian trade publication, has revive the rumor Friday morning, reporting that Apple is planing to implement the technology for its “flagship models” of smartphones in 2013.

Unlike the Qi inductive charging method, an interface standard developed by the Wireless Power Consortium for inductive electrical power transfer over distances of up to 4cm (1.6 inches), the iPhone maker is said to be working on its own wireless charging technology. At the very least, that does sound a lot like Apple…

Apple is likely to adopt the wireless charging technology developed internally, but it remains unknown if the next-generation iPhone will come with built-in wireless charging capability or with other attached accessories, said the sources.

Members of the WPC include Nokia, HTC, LG, Motorola Mobility and Sony Mobile Communications so Samsung’s eventual adoption of the Qi standards on the Galaxy S IV may drive the technology to become mainstream for smartphones, writes DigiTimes.

Samsung is set to launch the Galaxy S IV at a New York City media event on March 14.

@dujkan Truth. But, even the car industry is going to use Qi. I saw a wireless charging integrated cup holder for OEM at CES…thats awesome.

Interestingly enough, DigiTimes says Samsung will require Galaxy S IV users to “buy replacement back covers for their smartphone for access to a charging pad” rather than embed the wireless charging capability on the handset. 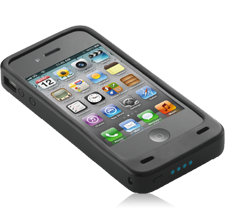 “Schiller notes that the wireless charging systems still have to be plugged into the wall, so it’s not clear how much convenience they add. The widely-adopted USB cord, meanwhile, can charge in wall outlets, computers and even on airplanes, he said.

“Having to create another device you have to plug into the wall is actually, for most situations, more complicated,” Schiller said.

And in its patent application for “Wireless Power Utilization in a Local Computing Environment”, Apple calls the current method of plugging a charger into a wall socket “unwieldy”.

Apple’s proposed solution is a “realistic” way to wirelessly recharge iDevices through near-field resonance that can wirelessly transfer “usable amounts of power over distances suitable for limited applications.”

By the way, I’m totally with Schiller.

The current wireless charging implementation isn’t the right solution as it simply replaces one cord with another.

I think Apple should leave this to third-party vendors, like Energizer’s iPhone Qi sleeve, pictured above, Powermat or Duracell’s MyGrid, to name a few.