Many observers view India as the next China. There is huge potential waiting for the smart device player able to offer India’s mobile consumers a low-cost, prepaid product. In just the latest example of analysts scrambling for data to define the market, new research coming from India suggests an explosion of tablet sales – until you dig into the details.

According to India-based CyberMedia Research, tablet shipments in the world’s second largest market rose to 3.11 million units by the end of 2012. Demand was particularly on fire during the last two quarters with around 1 million tablets shipping. Although Apple was reported in third-place behind Samsung and an Indian manufacturer, there’s a question of whether researchers counted tablets or a cross category of smartphones nicknamed ‘phablets’…

The CyberMedia Research data shows 1.1 million tablets shipped in India during the third quarter, with 1.09 million units for the final quarter of 2012. That is a noticeable increase over early shipments when 904,000 tablets shipped during the second half of last year.

India’s Micromax, which makes the Funbook tablets, grabbed second place with 14.3 percent and Apple turned in a third-place showing with 9.1 percent. Samsung and Micromax retained the top two spots during the fourth quarter, but Apple was pushed to fourth place as Android tablets from India’s Karbonn took third place. 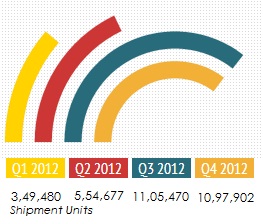 But are we comparing apples to oranges?

Turns out, CyberMedia Research counted any device which had a screen at least 5 inches wide as a ‘tablet.’ This could give Samsung’s Galaxy Note II or a number of other smartphones with large screens an edge over Apple.

When the research firm limited its examination of shipments to only devices with at least a 7-inch screen, the results changed. Samsung fell to third place with 10.39 percent of the market, Apple jumped to the second spot with 10.88 percent and home-grown Micromax took top honors with 17.07 percent.

CyberMedia pledged to separate the ‘phablet’ and ‘tablet’ markets in its next research update. This means we’ll likely see a more representative picture of India’s smartphone and tablet markets when 2013 numbers appear.

Hinting that Samsung’s lead is only due to what researcher Tarun Pathak calls Samung’s “first-mover advantage,” India’s phablet sector is likely to heat up for the South Korean company.

Indeed, Apple has taken a number of marketing steps to increase its visibility as well as combat an image as being too pricey for India. Echoing CyberMedia’s general picture of increased demand, the iPhone and iPad maker has seen greater adoption of its products in the country, quadrupling its sales in the nation recently.