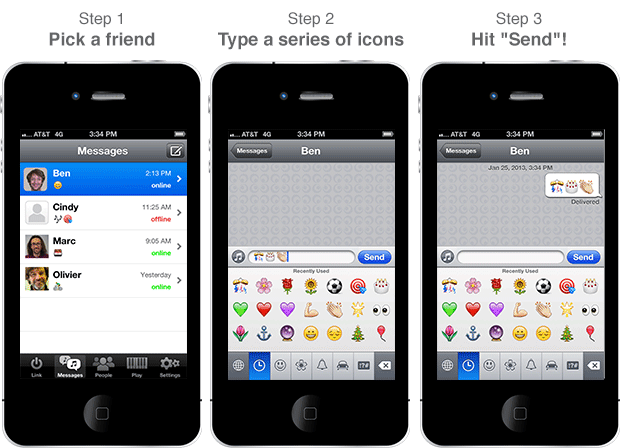 As we’ve said time and time again, we’re huge fans of Kickstarter here at iDB, but everyone once in a while something pops up on our radar that makes us question the wisdom of making it easy for people to build and sell almost anything.

Take TeleSound as a prime example. With a goal of $100,000 and nearly a month to reach it, TeleSound is a little accessory that turns Emoji icons into audio, making it easy for your friends to not only send you silly little pictures, but to also annoy your cat in the process.

Is this uninhibited invention at its finest, and are we just getting old and boring? You be the judge…

Until relatively recently, Emjoi icons were not available as standard on iOS worldwide, but ever since Apple recitified that situation we’ve been inundated with messages filled with little dogs at best, and weird flowers at worst. TeleSound aims to add a touch of audio to the annoyance by selling its Bluetooth 4.0 enabled device to the unsuspecting masses.

The way it works is actually quite simple. Using a bespoke app, people send and receive messages with Emjoi icons in them. The TeleSound service then attaches audio to those icons, and assuming it’s within range, the little plastic puck-type accessory plays them. Send a picture of a cat, and you’ll get a cat sound at the other end. Sounds awesome, right? Right?!

Getting in on the fun will set you back at least $34, and you can even pledge an eye watering $1,000 should you want your own personal Emoji. To each their own!

In case you hadn’t guessed, we’re not entirely sold on this particular Kickstarter project, but we’ll give it the benefit of the doubt for now. There’s potential here should TeleSound stretch beyond Emojis, but as things stand, we’re not sure we need one of these in our lives just yet.

Will you be ordering?