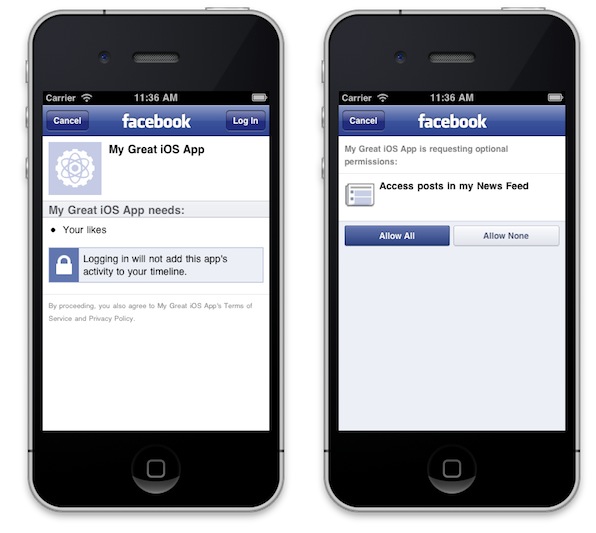 Mark Zuckerberg’s social networking company last July released a software development kit (SDK) for programmers to make it easier to write apps that take full advantage of Apple’s deep Facebook integration in iOS 6. It’s been updated a few times since and today Facebook announced that it is enhancing the SDK with better APIs and other improvements. This update also includes bug fixes that improve stability, is backwards compatible and can be downloaded now direct from Facebook…

According to the company, this iteration of the Facebook SDK includes beta support for logging in-app purchase events with select partners, in addition to additional app usage metrics that now enable programmers to log metrics such as iOS 6 Share Sheet and built-in native UI controls usage through the SDK.

By doing so, developers can have a better idea on how their software behaves and what social features people use the most. API improvements include a new FBAccessTokenData type which makes it easier to open a session from token data explicitly, and to better handle app and deep linking.

Facebook is also working on a solution for native iOS apps to log conversion events. That should help with ads optimization and monetization opportunities, the firm explains:

Conversion measurement helps businesses measure and optimize the return on investment of their Facebook Ads by reporting on the actions people take after viewing those ads.

And as part of its broad iOS push, Facebook has also redesigned its iOS Dev Center. The Facebook SDK is great, but getting people to implement its features is a pain.

Even though iOS 6 has been available for nearly nine months now, I still encounter a bunch of apps that don’t take advantage of native iOS Facebook features. This is especially true for various news readers: their insistence on outdated web forms to connect my Facebook account – rather than simply ask for permission to use my Facebook credentials from iOS Settings – has been ticking me off.

It’s not just relatively unknown apps: some of the popular App Store software also isn’t immune to this. A good example are the Shazam apps that only recently implemented standard iOS Sharing Sheet for sharing music tags on Facebook.

By the way, Shazam’s iPad app still uses the old web form for Facebook posting, though the company today said a forthcoming iPad build will fix this.

Facebook said a little over 45 percent of the top 400 grossing apps on the App Store are now integrated natively with its service.