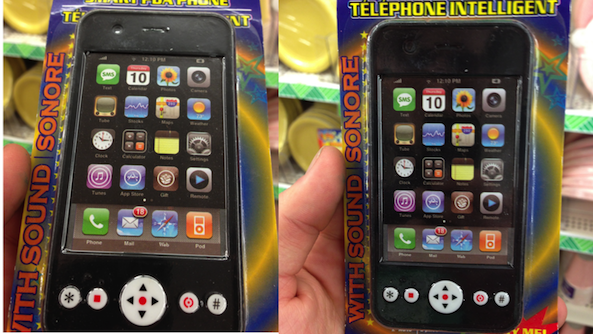 We’re not sure if this is cool, or copyright infringement, but either way here you go. We’ve come across what appears to be a toy iPhone, that has seemingly been jailbroken. Notice the Cydia icon in the bottom row of icons?

Of course, it’s not called an iPhone. The packaging reads ‘Telephone Intelligent.’ And instead of Cydia, the iconic brown icon is labeled ‘Gift.’ But either way, it sure looks like someone is selling toy jailbroken iPhones…

Gizmodo points to images of the toy, but doesn’t provide any additional information. By the looks of it, it’s more than likely a ‘dollar store’ toy, meaning you could come across it in any grocery store or drug store toy aisle.

This isn’t the first time we’ve seen something like this. A few years ago, we wrote about a similar toy. And it’s not hard to figure out why—more than 20% of evasi0n’s traffic comes from China, where 90% of kids’ toys are made.

It’s still interesting for a couple of reasons. For one, it speaks to the popularity of jailbreaking, as the designers obviously chose to include the Cydia icon on the toy iPhone’s home screen. And two, you have to wonder if it’s legal.

Saurik was pretty vocal about the ‘Cydia’ app that popped up in the App Store last summer, using his trademarked name and icon. And this certainly appears to be a similar situation, although tracking these guys down may prove far more difficult.