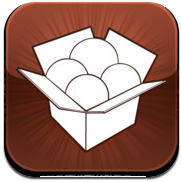 The App Store hasn’t had any shortage of knockoff apps since its creation a few years ago. When popular games such as Angry Birds or Cut the Rope make their way up the charts, you can expect a few unscrupulous developers to rush and try to get their copycat app approved and available in the App Store in order to make a quick buck.

Surfing on the popularity of Cydia, the App Store for jailbreak apps and tweaks, one shady developer thought that releasing an app called Cydia and making it available to over 300 million iDevices (no jailbreak required, mind you) would be a good idea…

Today, if you navigate through the App Store and do a search for “Cydia”, the first result that will come up is this bogus app. All it has from the real Cydia is the name and an icon that strangely mimics the original one. 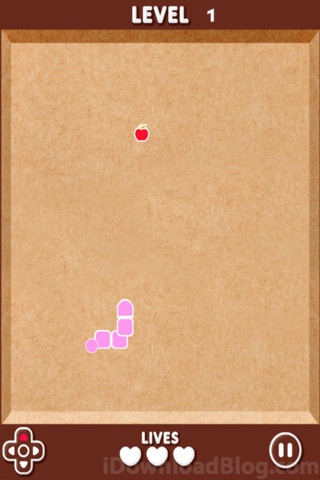 Fake Cydia won’t let you install third party packages, so don’t even bother. Instead, it is a simple-looking game based on the definition of Cydia, as we explained a couple years ago:

Cydia is actually named after a moth. Cydia pomonella is the scientific name for the “coddling moth,” or what we would most likely recognize as the stereotypical apple worm.

Cydia funny and popular snake game you may remember from childhood. Its main character – a kind of caterpillar named Cydia. Collect all the apples and pass as many levels as you can.

Looking at the reviews on this application, it is clear that a few people got tricked into buying this scam app. All reviews are actually really negative. One review stands out though: Saurik’s own review and warning about this application: 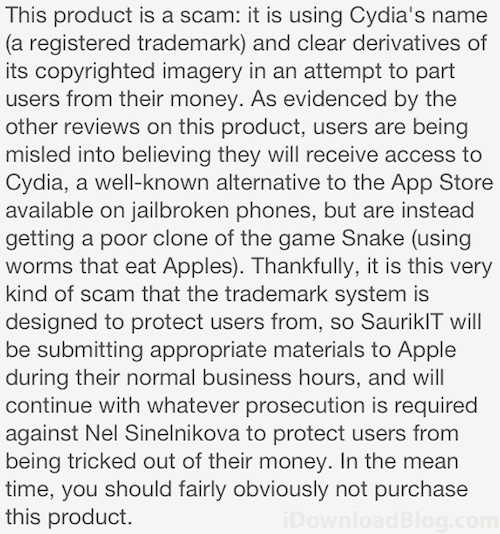 I don’t expect this application to stay in the App Store for too long. If for some strange reason you wanted to get your hands on it, you can download it for $0.99. Obviously, we recommend against it as there is no reason to make this scammer richer.

Update: the app has been removed from the App Store.