The iPhone and iPad maker also ranked as the third largest U.S. consumer electronics retailer, just behind Best Buy and Walmart. Amazon and Staples rounded out and industry where only smartphones and tablets saw revenue gains last year…

The remaining three members of the top five had declining revenue. Little wonder – desktop, notebook and flat-panel TV revenue was all in negative territory.

“Most market segments have high penetration rates and the demand for additional devices is slowing, or declining,” said Stephen Baker, NPD vice president for industry analysis.

In other words, U.S. consumers already have desktop and laptop computers, as well as LCD televisions. The impact of a downturn in three out of five consumer electronics categories could be seen in the emphasis consumers place on the devices.

Those three categories, along with smartphones and tablets, comprised 53 percent of U.S. consumer electronics sales in 2012 – up from 49 percent in 2011, NPD said. 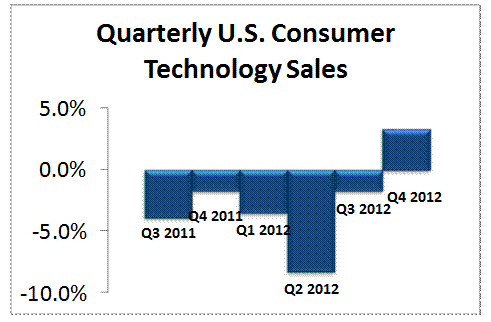 Sale of desktop computers in the U.S. fell 11 percent, with notebook demand off 9 percent and flat-panel TV sales dimmed by 7 percent, according to the researchers. Indeed, flat-screen TV sales were “mired in a cycle of declining prices and weak volume.”

Little wonder LCD companies such Panasonic as are jettisoning their TV product line in favor of producing iPad displays.

By comparison, tablet sales increased 42 percent and smartphone sales rose 25 percent during 2012. Still, that was not enough to pull the dinosaur technology from the tar pits. However, if the incessant rumors are right, Apple could help flat-screen sales when and if it announces an HDTV.

The take-aways from this report are rather obvious: Apple (and to a lesser extent, Samsung) are riding a wave of consumer demand for smartphones and tablets. Not even double-digit increases in sales of those devices are enough to rescue the likes of dinosaur technologies.

It’s akin to cell phones trying to make up for lost sales of land-line Princess handsets. Although that has been attempted: witness Microsoft trying to recoup lost desktop software revenue via the Surface tablet.

Purely desktop and notebook manufacturers need to accept reality: the same reality AOL faced when confronted by commercial ISPs or the makers of ZIP storage devices faced from the compact disc. The desktop and notebook can no longer rely on consumers buying the new model, the latest flavor.

The tablet and smartphone have taken that place. We’ve seen Dell accept this new reality, it is only time before HP also must adapt to the new consumer electronics landscape as well.