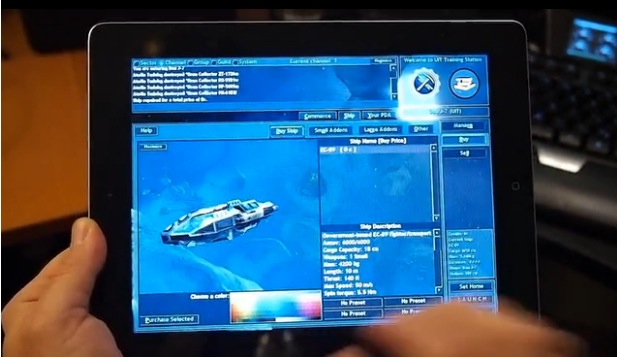 Guild Software’s sci-fi MMORPG Vendetta Online has been available on Android, Linux, Mac and Windows (RT included) since 2004. It’s coming soon to iOS, with the first public iPad preview having launched today on Kickstarter. Guild Software’s John Bergman explains that the team is planning on shipping the iPad build “as soon as we can” before fully focusing their attention on gameplay enhancements. The video demonstration runs on a prototype build running on an iPad 2 connected over Wi-Fi…

John posted a video of the iPad build, but I couldn’t embed it here so hit Kickstarter to check it out. He says the game requires at least the iPad 2 because the original iPad just lacks the oomph to run Vendetta Online smoothly.

The prototype version is running pretty well, although we still have a lot of work to do, aside from those remaining features and polish where we’re asking for your Kickstarter support (voiceover enhancements, retinal content, etc).

Guild Software bills Vendetta Online as an epic space-based MMORPG which allows players to fill the roles of spaceship pilots in a vast, persistent universe:

Traders, miners, pirates and others vie for wealth and territory in a galaxy filled with danger. A completely real-time flight model and combat system, as well as large-scale space battles, create a unique experience in the MMO genre.

Development of the game is ongoing, often with weekly updates and content drops. Communication with the userbase is maintained through our forums, while a volunteer subset of users, the Player Contribution Corps actually takes part in the creation of new content, such as missions.

Vendetta Online was released as a public alpha in 2002 before hitting major North American retailers as a commercial, subscription-based product on November 1, 2004.

The game again made headlines in March 2011 by becoming the first PC MMO to jump to mobile platforms.

By the way, if you love Kickstarter, you’ll want to install their recently released official iPhone app.