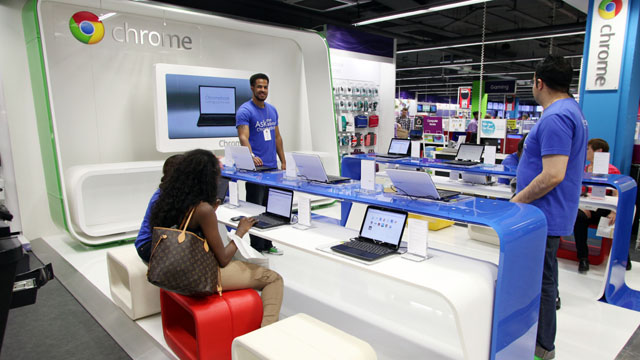 Once a highly valued partner, Google has spent the last few years moving in on Apple’s territory. It’s done it in the computer space, with its Chromebook OS, and in the smartphone space with Android. And now it looks like it’s preparing to do the same thing in retail.

A new report is out this afternoon claiming that the Mountain View company is in the process of building standalone retail stores in the United States, in an effort to get its products into more hands. And its flagship locations could be ready by the holidays…

“An extremely reliable source has confirmed to us that Google is in the process of building stand-alone retail stores in the U.S. and hopes to have the first flagship Google Stores open for the holidays in major metropolitan areas.

The mission of the stores is to get new Google Nexus, Chrome, and especially upcoming products into the hands of prospective customers. Google feels right now that many potential customers need to get hands-on experience with its products before they are willing to purchase. Google competitors Apple and Microsoft both have retail outlets where customers can try before they buy.”

The report goes on to point out that Google actually already has its hand in the retail business. It currently has hundreds of Chrome Stores-within-a-store setup in Best Buys with Google-trained employees—quite similar to what Apple does with its in-store shops.

But Best Buy, and Google’s other retail partners, still handle everything on the sales end of product transactions. And Google wants more. So it’s looking to open up its own standalone retail stores, giving it its own platform for launching and selling its products.

Apple has seen tremendous success with this method. With its products displayed prominently throughout its brightly-lit stores, customers come in by the thousands to touch, play with, and more importantly buy, its iPads, iPods and pretty much everything else it makes.

But replicating that success, as Microsoft will tell you, isn’t easy. The Redmond software giant opened its first two Microsoft Stores shortly after it launched its Windows 7 operating system back in 2009, and they have, thus far, failed to gain much traction with consumers.

It’ll be interesting to see what Google does in this space. There’s no doubt that running your own retail chain can come in handy when trying to roll out new products. Say perhaps its new Google Glasses, or the ‘X’ handset it’s rumored to be building in-house.

What are your thoughts on Google building standalone retail stores?