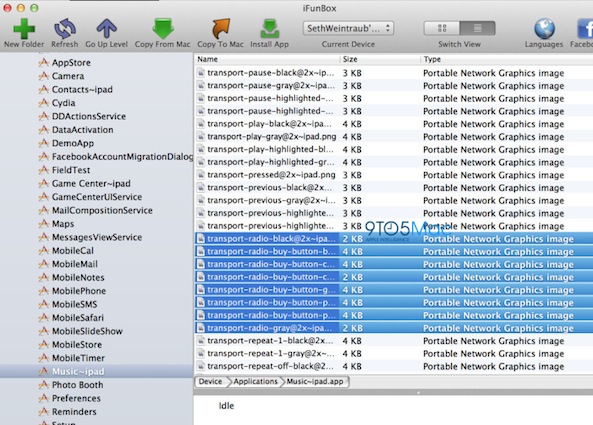 At the end of last year, there was a lot of talk about Apple building an internet radio service similar to Pandora. But the last we heard, it was having trouble getting the big record labels on board with the project. And the chatter has since quieted down.

But the speculation has been rekindled today, with a new discovery in iOS 6.1 thanks to the recently-released jailbreak. It appears that the iPad’s Music app contains some hidden ‘Radio Buttons,’ suggesting that there may be something to the rumors…

“Having a look around ournewly jailbroken iPads with iFunBox, we happened on a new set of files in the iPad Music.app. The files are called some variation of “radio button” with an icon that looks similar to the radio icon that used to be in iTunes for Mac.”

The Wall Street Journal was the first to report on Apple’s so-called ‘iRadio’ project last September, saying that the company was in talks to license music for a “custom-radio service” similar to Pandora. And interestingly enough, both The New York Times and Bloomberg later corroborated the report, citing their own sources.

At the time, all outlets reported that the service was on track for an early 2013 release. But it still remains unclear whether negotiations over ad revenue, which CNET reported was a major point of contention with record labels, have advanced since then.

What do you think, could Apple really be on the verge of launching its own radio service? Would you be interested?