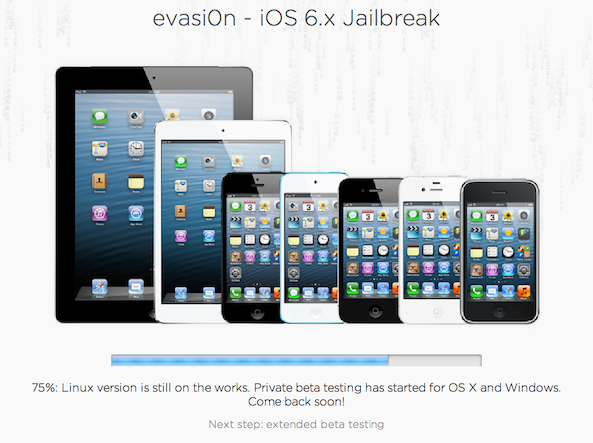 As most of you know, the iOS 6.x jailbreak got official this week. The evad3rs launched their website on Wednesday, unveiling evasi0n, the software that’s going to break our devices free from Apple’s chains.

Also on the website is a progress bar, which gives an updated look at how close the jailbreak is to completion. And if you looked at it this morning, you would have noticed that it just jumped to 75% complete…

While the Linux version of evasi0n is still in the works, both OS X and Windows apps are finished. In fact, private beta testing has begun on the latter two, and the next step is listed as ‘extended beta testing.’

Once all versions are complete, and have been thoroughly tested, evasi0n should be nearly ready for public release. All signs point to Sunday, but pod2g said ‘nothing is certain.’ It could be sooner or later than that.

As we’ve said before, the evasi0n jailbreak will work on all iOS devices running iOS 6.0 or later, with the exception of the Apple TV 3. If you have any more questions, check out our post on jailbreak preparation.