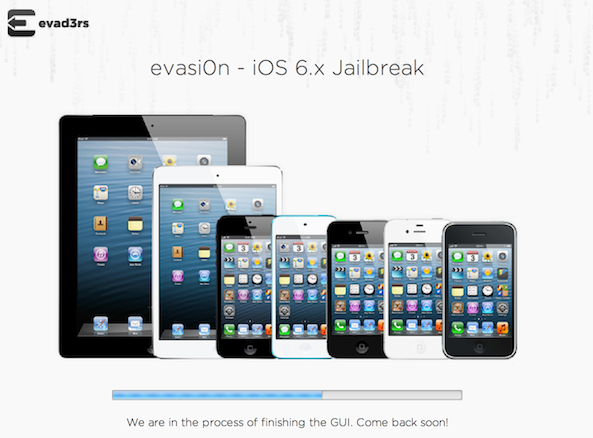 The iOS 6.x jailbreak has a name, and it’s ‘evasi0n.’ The evad3rs—a team of hackers made up of musclenerd, pod2g, pimskeks, and planetbeing—have just launched their official website. And their first post is a big one.

Not only does it give the name of the new jailbreak, but it also shows their progress on it, what the requirements will be to run it, and other details…

So it looks like the project is moving along nicely. The site says that the team is in the process of finishing the GUI, and that the next step is private beta testing. And judging by the status bar, it looks like they’re 60% done.

I also found the ‘Credits’ section to be pretty interesting, as it thanks well-known theme designer Surenix and both chronic and iPhone dev teams for their support. Surenix, as most of you know, designed the evad3rs logo.

Finally, it’s worth mentioning that there is a ‘Donate’ button at the bottom of the website, if you would like to contribute. As always, iDB advocates supporting those that put in countless hours of work so we can free our devices.

We’ll let you know as soon as the site is updated, or we receive more information regarding evasi0n. Until then, make sure to check out our post on how to prepare for the upcoming jailbreak.