Don’t get too excited about that unreleased Apple TV device which popped up in Monday’s iOS 6.1 release – Apple confirmed it’s just a minor internal upgrade that won’y affect product features at all. That much was expected: after all, the very ‘AppleTV 3,2’ designation indicates a minor refresh (current-gen 1080p Apple TV is being referenced as ‘AppleTV 3,1’). We kinda hoped that the new Apple TV would run third-party apps or become a full-blown television set, but Apple says ‘no’…

An Apple spokesperson said in a statement to The Next Web that ‘AppleTV 3,2’ is basically a stealth refresh:

The component changes we made don’t affect product features and Apple TV customers will continue to have the same great user experience.

This aligns with yesterday’s FCC filing which details a slightly smaller Apple TV with a new model number A1469. At 93.78 square mm, the FCC device measures slightly smaller compared to the 98 square mm of the current third-generation model.

However, Apple says there will be no external difference in size versus the current-generation Apple TV. Heck, the set-top box even won’t be marketed as a new version, the publication has it.

Another tidbit we can glean from the FCC filing: the A1469 model has the same Wi-Fi capabilities as the current-gen Apple TV, but has a single WLAN+Bluetooth antenna (like the iPhone 5) instead of two separate antennas, via a Broadcom BCM4334 wireless chip. 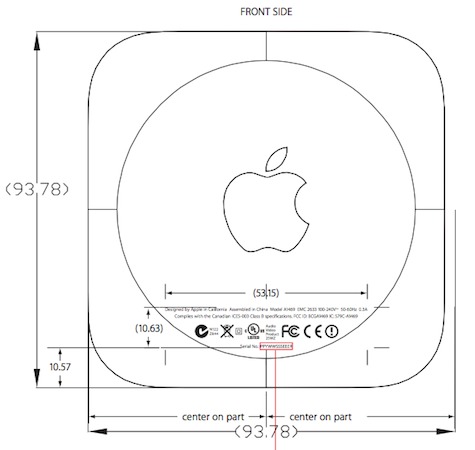 The current-gen Apple TV with 1080p support was unveiled on March 7, 2012. The set-top box runs a variant of the iPad 2’s dual-core A5 chip fabbed on Samsung’s 32nm (die shrunk) process and with one processing core intentionally disabled.

Nothing to see here folks, moving on.