To say that I’m a big weather buff is an understatement. I think I need help because virtually every new weather app finds its way to my home screen, from free offerings like Solar and Sun to paid ones like WTHR. Weather.com, The Weather Channel and AccuWeather? So last century. It goes without saying I’d check out this latest entrant to the the crowded weather app category on the App Store.

Nooly sets itself apart from the crops of other weather apps by trying to predict the minute rain starts, the time light rain turns into thunderstorm, exactly when snow starts and at what time light rain turns to heavy rain – all tailored to your current geographical location and with each prediction accurate down to an area of 0.4 square miles, or approximately one square kilometer…

An Israeli startup behind the app says it gets updated every five minutes with up-to-date weather data. Nooly prides itself with knowing the exact weather in every school, park road and in over a whopping thirteen million locations in the United States.

It’s pretty straightforward: just type in a desired location like a restaurant, park or any landmark you’ll be visiting and Nooly will tell you how the weather will evolve minute-by-minute. Considering weather is a localized phenomenon that can change rather rapidly, this has gotta be arguably the most useful feature of the app. 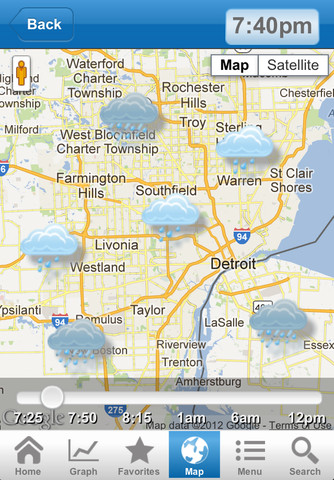 The company claims Nooly can predict a range of other weather events, like snow storms, fog on the road, hail storms, freezing rain, cloud coverage, UV intensity from the sun and weather that can develop while you are at the beach or sailing.

It even predicts – to a certain extent – the exact time these waves of extreme thunderstorms can impact your location. Nolly’s secret sauce is a technology that was researched and developed by Prof. Daniel Rosenfeld (HUJ) and Prof. John Mecikalski (UAH), some of the leading scientists in the field of atmospheric science. 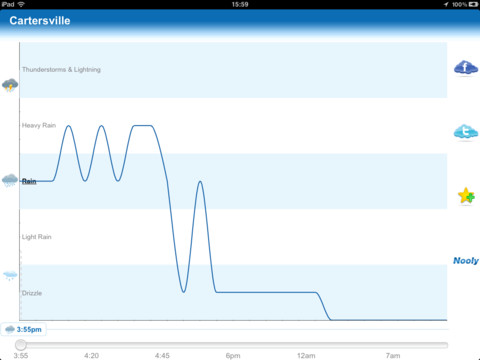 This ain’t child’s play: Nooly is connected to two of NASA / NOAA weather satellites (GOES East and GOES West) and also to real time data from NSSL radar network (over 260 radars across the continental US and the southern parts of Canada – also known as NMQ or Q2).

By comparison, services like Weather.com, Weatherunderground and Weatherbug base their predictions on the National Weather Service’s forecast. Using premium data, Nooly employs a sophisticated weather model:

Nooly’s system is literally tracking each cloud above the US, from its inception. It runs a patented algorithm that predicts the potential growth clouds, down to the smallest (as small as 0.4 square mile). Nooly’s algorithm is the only one focusing on identifying and predicting the potential of convective cells within rain clouds.

These convective cells, their growth, decay and interaction with each-other ultimately determine whether a cloud will develop into a short lived thunderstorm, snow blizzard, a massive rain event or even a tornado.

Founder and CEO Yaron Reich notes Nooly, a project in development, has an API so other developers can write apps that plug into the Nooly cloud. 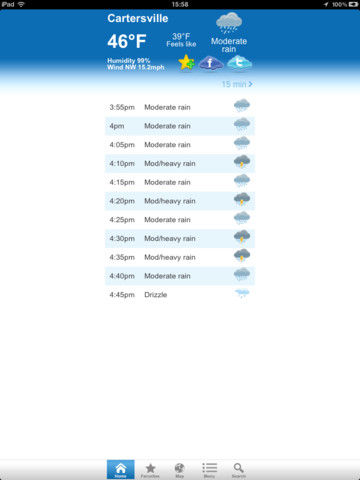 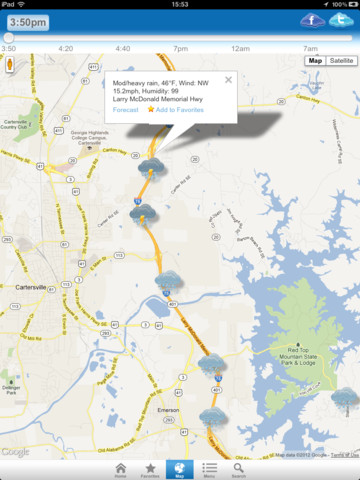 Nooly is a free download for Android and iOS.

You’re probably all revved up by now, but don’t get too excited because it’s just a weather app and Mother Nature can often be unpredictable with weather.

By the way, don’t consider yourself a weather guru unless you’ve checked out Netatmo’s gorgeous Urban Weather Station.