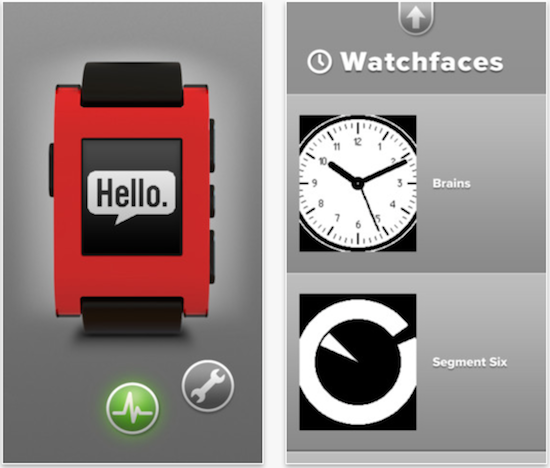 Good news this morning for anyone who ordered a Pebble smartwatch, the companion iOS app is now available for download. The news comes just a day after the company announced that it had started shipping its first round of watches.

The app is needed to unlock much of the Pebble’s functionality, and as of yesterday, it wasn’t in the App Store. And there was some concern that customers would get their watches, after months of waiting, and not really be able use them…

But luckily, that’s not the case. After two weeks of review time, Apple finally approved the application and it hit the App Store late last night. The software allows you to add new customized watchfaces to your Pebble, and update its firmware.

Here’s the list of features from its App Store description:

The Pebble app provides a dashboard for your Pebble smartwatch:
– Notifies you when software updates for Pebble ready to install
– Installs and remove custom watchfaces onto your Pebble
– Sends ping test messages to your Pebble
– Helps you troubleshoot issues

The app doesn’t look like much now, but the folks at Pebble have big plans for it. You’ll eventually be able to install new apps to the watch—and there should be a broad selection thanks to the available SDK—and add support for other iOS apps.

The Pebble is by far one of the most recognizable competitors in the growing smartwatch space. It first started turning heads when its Kickstarter project shattered previous funding records, collecting over $10 million in pledges from backers.

If you’d like to learn more about the watch, you can read our full feature on it here. If you’re interested in ordering one— they run $149.99—you can do that here. And if you already have one on the way, you can download the app by clicking here.