As you can see in the clip above, Iconofactory today released an update to its Twitter client on the App Store, Twitterrific. The app has some loyal following – in fact, both TweetBot and Twitterrific are my favorite go-to Twitter clients for iDevices. Twitterrific fans should appreciate half a dozen new features and a bunch of improvements in this release.

Most notably, the new Twitterrific version 5.0.2 now has a simplified in-app web browser and reading mode supporting Instapaper or Readability. It also lets you find tweets in all timelines via History, preview images directly in the timeline and so forth. Push notifications, you say? Read on for the full breakdown…

Although media is now displayed inline, Instagram links open in the in-app browser because developers are now required to adhere to Instagram’s new display guidelines.

As for the in-app web browser, it finally uses the entire screen on your iPad. As a bonus, Twitterrific’s photo viewer no longer renders a frame around images, another welcome tweak. 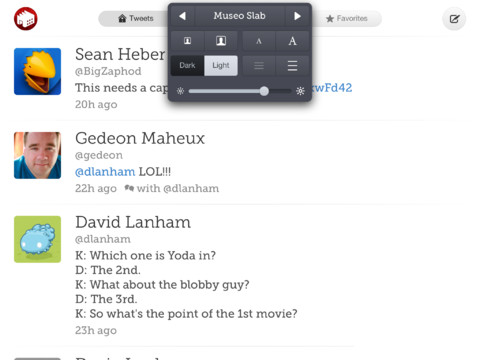 As far as push notifications are concerned, Iconofactory explains in a blog post that this feature is still being worked on and is in its preliminary stage of development:

We know that users are patiently awaiting the addition of native push notifications for Twitterrific. With Twitter’s help we have begun the preliminary work on this most anticipated feature. It’s still very early and we don’t have a planned release date.

• in-app web browser now uses the entire screen on iPad
• Twitterrific now loads 100 tweets while refreshing or loading more
• new gesture: Tap and hold the RT icon on a tweet to quickly retweet with a comment
• when user avatars are hidden in the timeline, tap on a username to open a profile
• VoiceOver now uses a relative date/time on tweets instead of an absolute one
• added VoiceOver accessibility to the Load More button
• searches and Lists in the sidebar are now ordered alphabetically
• tapping outside of popup navigation on iPad now dismisses view
• visual improvements to popup navigation and views
• other minor interface improvements

Twitterrific was released back in November 2012 and received its first maintenance update the following month. The app is designed for all form-factor iOS devices and is optimized for the iPhone 5.

If you haven’t yet taken the plunge, now could be a good time as Iconofactory shaved 50 percent off Twitterrific for a limited time, meaning you’ll be only dropping three bucks in exchange for your copy.

What’s your preferred Twitter client on the iPhone and iPad?