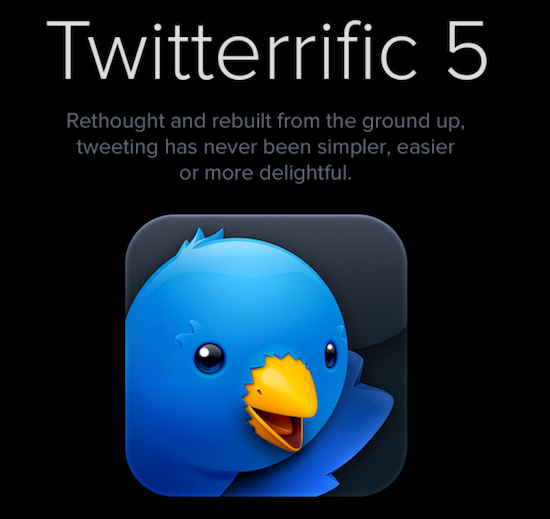 Good news Twitterrific fans, Iconfactory has just published a teaser page for the upcoming 5.0 release of its popular Twitter client. The app, which has collected a number of accolades over the years (including an Apple Design Award), has not seen a major update since early 2011. So needless to say, expectations are high…

And judging by the text from the above Twitterrific 5 promotional image, we’re all in for a treat. “Rethought and rebuilt from the ground up, tweeting has never been simpler, easier or more delightful.” The update will run on your iPhone, iPad or iPod touch, and is expected to hit the App Store next Thursday, December 6.

It’s good to see that Iconfactory is still committed to its Twitter client, despite the fact that the social network has been clamping down on third-party apps as of late. The company recently told developers that it was going to restrict the amount of users they could support — a major factor in Tweetbot for Mac’s $20 price tag.

We’re looking forward to getting our hands on Twitterrific 5, and as usual, we’ll let you know as soon as it’s available.