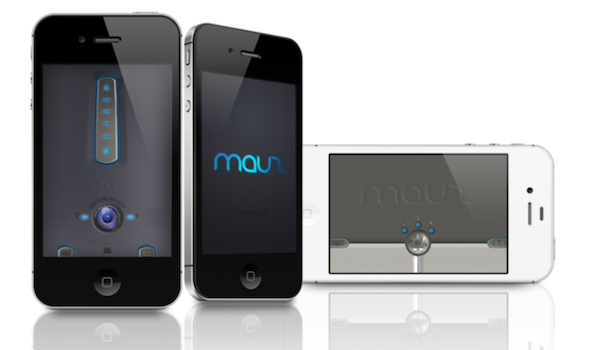 Thanks to the introduction of the App Store, we’ve had the ability to turn our iPhones into computer mice for quite some time now. Off the top of my head I can think of several apps that do this, including Mobile Mouse and Touch Mouse by Logitech.

But none of them can do what the team at Spicebox is claiming their new MAUZ accessory can do. The peripheral connects to your iPhone via the dock connector, and gives you motion and gesture-based control over computers and other gadgets…

Plugging in the MAUZ to your iPhone and launching the accompanying app will give you control over your computer in a variety of different ways. To start off, you can use it as a normal mouse, with left and right click buttons, or use it as a touch pad.

But where the accessory really shines are in its alternative control methods. For example, it supports motion control. So you can pick it up and wave it in the air like a Wii remote. Not cool enough? How about Minority Report-like air gesture controls?

I’m still not quite clear on how the MAUZ connects to your computer, but given the fact that Spicebox says that it also connects to smart TVs, I’m assuming its via Wi-Fi. On that note, the team is also releasing a SDK to further extend its functionality.

If you’re interested in the iPhone accessory, you can pop over to its Kickstarter page for more information. The project needs to hit a goal of $150,000 in the next 60 days to get funded, and you can help them by pledging—$45 gets you on the pre-order list.

It appears that Apple’s Lightning licensing restrictions continue to cause problems for third parties as, like a lot of accessories we’ve seen recently, the MAUZ does not yet support the new plug. But it’s hoping an iPhone 5 version will be ready by August.

I’m kind of torn here. The technology is no doubt very impressive, but how well will all of this — the motion and air gestures — work in the real world?

What do you think of the MAUZ?