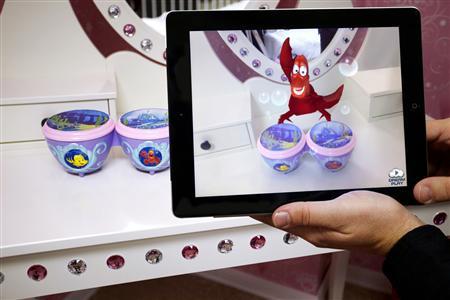 It’s a familiar story. You buy your children the hottest toy, which soon loses its magic and ends up in a pile of the other overly-priced and unused items. Disney is hoping its found the solution via your iPhone or iPad camera, an iOS app and augmented reality. The goal: extending the life of toys – especially those with the Disney logo.

Instead of just playing with a Disney piano or a licensed Little Mermaid doll, children can point the camera of their Apple or Android device at a specially-designed toy and watch as cartoon characters interact with the item. The media firm’s DreamPlay technology was unveiled Tuesday at the Consumer Electronics Show in Las Vegas…

The DreamPlay tech is the result of Disney teaming with toy company JAKKS Pacific and Patrick Soon-Shiong, who Reuters describes as “Los Angeles’ wealthiest person.” By pointing a camera at the specially-designed products, images and video are streamed to the mobile device.

“Kids find out that playing with their toy doesn’t end when they get it home,” Bob Chapek, Disney’s chief of consumer products, told the news service. In one example, Sebastian, the crab from the Little Mermaid, appears on an iPad screen, banging on DreamPlay drums. Since 2011, Chapek has increased Disney’s use of technology in combination with its licensed toys.

The first DreamPlay toys will appear in October (just in time to whet children’s pre-Christmas appetites) from JAXX, which licenses its line of Princess dolls from Disney. JAXX’s involvement comes amid concerns by Wall Street analyst how the company is faring in the cut-throat toy business.

Previously, Disney’s so-called Appmates in conjunction with free companion iPad apps gave us a taste of things to come. Here in the below clip you can see how an iPad app can tell which toy has been placed down, reacting accordingly.

Target and Toys R Us will be the first retailers to stock the new toys, which Disney and its partners say will cost “a couple of dollars” more than versions without augmented reality. By 2014, international distribution will begin, including China’s department store giant Beijing Hualian Group.

If the new toys don’t catch the imagination of young shoppers, Disney is also aiming its augmented animation at toy shoppers. According to Reuters, get ready to see Tinkerbell flitting about the store when you check her out with a smartphone.

Of course, it’s still unclear whether kids will want to pick up an iPhone or iPad to play with their toys. However, gauging by the amount of time kids already spend with technology – from TVs to YouTube – there should be little doubt. My grandson, for instance, spends more time on an iPad than he does with his Cars toys.

This won’t Disney’s only foray into augmented reality. The company reportedly plans to soon introduce Disney Infinity as a way toys based on Cars or other Disney and Pixar films to “interact” with console games.