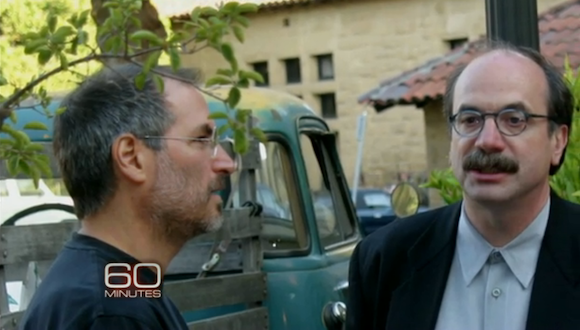 This is kind of cool. David Kelley, the founder of IDEO, an international design firm and innovation consultancy, spoke with CBS’ 60 Minutes last night about a wide range of things, including his close relationship with Steve Jobs.

IDEO played a big role in early Apple, designing its first Mouse, the Lisa, and more. And naturally, this bore a friendship between the two founders, giving Kelley some great Jobs stories—particularly one about his first iPhone…

Here’s a video of the full interview (via MacRumors). The Steve Jobs and iPhone-related parts can be found at the 3:00 and 7:42 marks in the clip, but if you’re not real familiar with who Kelley is, the entire things is worth watching.

For those of you who can’t see the video (yes it’s in Flash, thanks CBS), the coolest part of the interview is when Kelley talks about getting his first iPhone. Apparently the day after it was announced, Steve Jobs hand-delivered one to him.

But that’s not even the best part. Not only did Jobs bring him the unreleased handset, but he offered to hook it up for him:

“So he decides to hook it up for me, so he gets on the phone with AT&T and he’s going to hook up my phone, and it’s not going well. Eventually he pulls the ‘I’m Steve Jobs’ card, you know, he says to the guy ‘I’m Steve Jobs.’ I’m sure the guy on the other end says “yeah buddy, and I’m Napoleon,” like get out of here. Yeah, but anyway he never did get it hooked up. No, not that day.”

Kelley says that the biggest misconception regarding Steve Jobs was that he was malicious or intentionally mean. “He wasn’t,” he explains. “He was just trying to get things done. And you just had to learn how to react to that.”