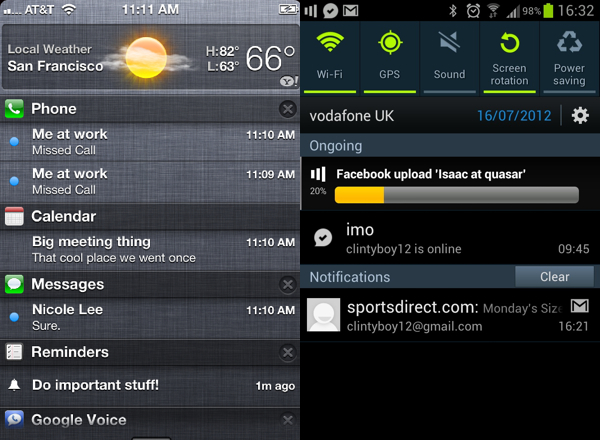 Samsung has reportedly filed a new lawsuit in its home country against Apple regarding its iOS Notification Center. It says that the feature, which Apple introduced last year in iOS 5, infringes on one of its active patents.

Of course, patent lawsuits have become commonplace between the two tech giants in recent years. Typically, however, Samsung has used its standards-essential, hardware-related IP to go after Apple. But this time it’s software-related…

PatentlyApple points to a new report from business-to-business resource BrightWire:

“The Korean online news site iNews24 is reported today that “Samsung Electronics has brought a lawsuit against Apple in a court in South Korea over its ‘Notification Center’ patent infringement.” No other details were made available at this time.

Not much else is known about the suit right now, but it wouldn’t surprise me if Google had a hand in it. The search giant was just awarded a patent covering Android’s notification center, and it’s been known to help out its partners.

Back in August, it was reported that Google was quietly lending support to Samsung during its high-profile lawsuit with Apple, offering advice and searching for prior evidence. And it also lent patents to HTC during its feud with the iPad-maker.

It’ll be interesting to watch this develop, because I think we’ve all heard the argument that Apple’s iOS 5 NC menu implementation “was inspired” by Android. And if Samsung has the documents to prove that, it could be very powerful.

What do you think, does Samsung have a legitimate case here?