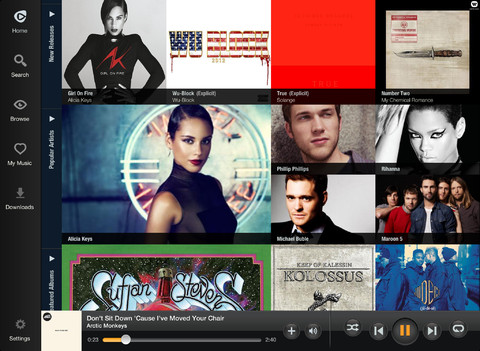 You have to hand it to Rhapsody. It hasn’t been an easy 11 years for the music streaming service, what with the failed acquisitions, and the rise of strong competitors like Spotify and Rdio. But the company refuses to give up.

And today, it has some good news for its subscribers. After months of waiting, Rhapsody has finally released a full-blown iPad app. It’s been built from the ground up with a gorgeous image-based UI, and has plenty of features…

Here are some of the app’s more notable features:

I’m not a Rhapsody member, so there’s not a lot I could glean from the iPad app. But judging by its current near 5-star rating, and the reviews in the App Store, it’s a winner. Obviously, if you use the music service, you’ll want to check it out.

For those that haven’t tried out Rhapsody yet, in its latest incarnation, the company is currently offering a 30-day free trial. After that there are two choices with varying degrees of options: $9.99 for Premier, and $14.99 for Premier Plus.

If you’re interested in trying out the new Rhapsody iPad app, you can find it in the App Store for free.