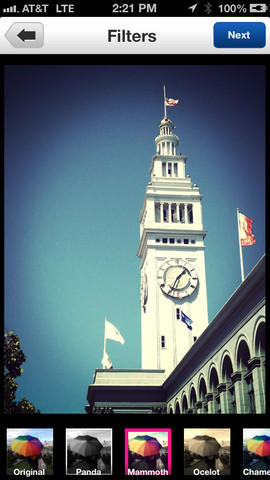 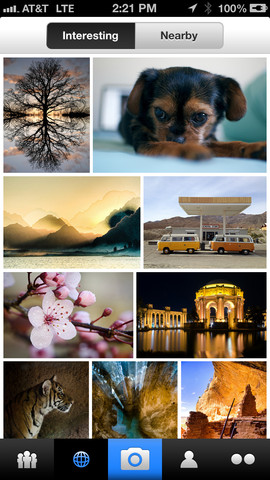 Following Instagram’s update that added a new Willow filter and yesterday’s big refresh of Twitter’s iOS client that now lets you crop a photo and apply up to eight brand new filters before tweeting it out, Yahoo too has joined the fray by revamping its aging Flickr iOS client this morning. And guess what? The redesigned app also touts filters as Yahoo attempts to stay relevant in the social photography space. There are sixteen unique camera filters to choose from, twice as much as in Twitter’s app (and also powered by Aviary). More features and screenies right after the break…

The app has a brand new interface that’s focused on larger image previews and it now supports full Groups capabilities. Another nice addition is the ability to explore interesting photos from around the world and nearby.

• custom filters enhance your photos plus photo correction, retouching and many other tools
• access your Flickr photos on any device – phone, tablet, computer and Apple TV!
• connect with others around shared interests. Whether it’s food, travel, or anything else – Flickr has more than 1.6M groups, so there’s bound to be a Group that interests you!
• new justified layout photo display makes your personal photostream look amazing
• see recent photo activities from your friends and family. Make comments or mark them as favorites.
• flexible, personal privacy options to make your photos as public or private as you want

Note that the Groups capability was previously available only via the Flickr interface on the web. Unfortunately, Flickr still doesn’t support the iPad natively, which is a shame, really. 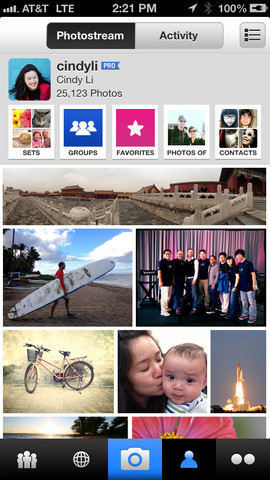 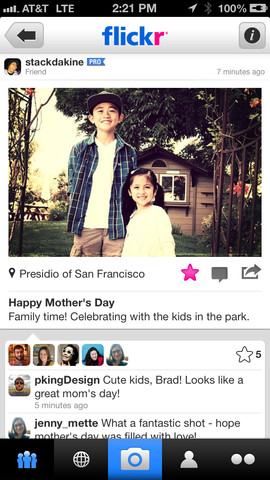 The all-new Flickr App is a complete redesign of the previous version. It’s now easier to use, more beautiful and includes more of the great features you love using on Flickr.com.

The company also updated its Mail app yesterday with a cleaner interface and a more streamlined functionality across platforms. It’s a pretty nice update and I urge you to check it out, if you haven’t already.

Now, this Flickr thing is a way overdue refresh, in my opinion.

Whoa. Flickr’s new iOS app is out, and it’s a huge update. I like it. Also, it looks very Instagrammy.

I’m not sure why exactly Yahoo sat on the sidelines watching as Facebooks, Instagrams, Twitters and Googles of this world obsolete its Flickr service, which to many people used to be the go-to photo sharing service.

Flickr.com imposes too many limitations on free accounts in terms of the number of albums and bandwidth, none of which apply to, say, Instagram.

I prefer to share my snaps with a closed group of Apple-totting friends via Shared Photo Streams in iOS 6. For everything else, I use Google’s Picasa Web Albums that, in my view, is the best photo sharing service for people serious about iPhone photography.

It’s also integrated nicely with the Google+ app on iOS and Android and I can keep my photos in sync using the free Picasa app for Mac and Windows. What’s more, Picasa maintains the original quality of my photos (all right, Flickr does that, too), unlike Instagram or Facebook.