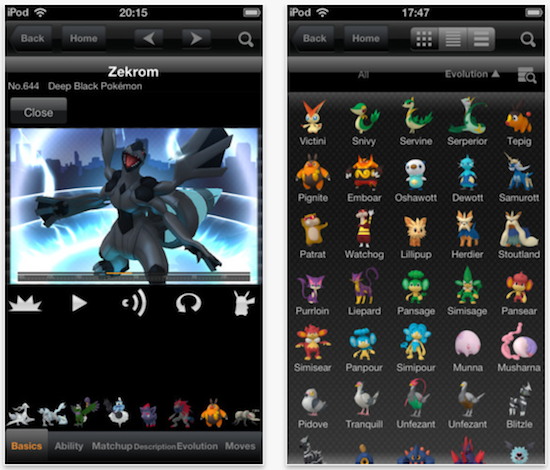 Late last year, Nintendo’s president Satoru Iwata went on record as saying the Japan-based video game company would not be porting any of its titles to the iOS platform, despite the fact that both users and investors were calling for it. He said doing so would mean “Nintendo would cease to be Nintendo.”

Knowing this, it was interesting to see The Pokemon Company, a subsidiary of Nintendo setup to market and license the popular franchise, has just released an official app in Apple’s App Store. It’s called Pokedex for iOS, and it includes everything you’d want to know about your favorite Pokeman characters…

The app first appeared in the Japanese App Store last month, and then popped up in the US Store yesterday. Here’s an excerpt from its description:

“Start with the basics, such as what the Pokémon looks like, its type, height, weight, and evolutions, and go from there to explore a rich trove of Pokémon details. You can find your Pokémon’s stats, its moves, TMs you can use on it, its Abilities, all its Pokédex descriptions, where it can be found, its Egg Group, and even what type of moves are strong against it.

Starting with a full-text search, you can search and sort Pokémon not only by their names, but also by combinations of type, Egg Group, Ability, type matchup, and learnable moves. It is always easy to find the Pokémon you’re looking for!”

I never really understood the whole Pokemon phenomenon — I never got into it. But there’s no doubt that the video-game-turned-full-on-media-franchise has a huge following. And a quick search in the App Store attests to that, returning more than 300+ (well, that’s just where I stopped counting) related results.

If you are into Pokemon, I’ve got some good news and some bad news for you. The good news is that the app looks great, and is very well done. The bad news is, it’s super expensive. Your initial $2 only gets you part of the Pokedex, with the others available as in-app purchases for $5. All told, you’ll spend about $26.

Regardless, if you’re interested, you can find Pokedex for iOS in the App Store for $1.99. Could this be Nintendo sticking its toe in the iOS waters? Maybe. But I doubt that it means we’ll be seeing Super Mario Bros. for iPad land anytime soon.

What do you think of the app?