As big shot analysts and Hollywood execs continue to argue whether or not Apple might ever build a standalone television set, people privy to the inner workings of Silicon Valley’s technology darling are not as convinced as the general public appears to be. Former Apple vice president Jean-Louis Gassée took to his blog to offer his take on Tim Cook’s recent comments in an NBC interview about television being an “area of intense interest” for Apple. He calls the mythical iTV an “enduring fantasy” and opines why the Apple TV set-top box is the only Apple television you’ll ever need…

To realize the dream, as discussed previously, you need to put a computer — something like an Apple TV module — inside the set. Eighteen months later, as Moore’s Law dictates, the computer is obsolete but the screen is just fine.

No problem, you’ll say, just make the computer module removable, easily replaced by a new one; more revenue for Apple … and you’re right back to today’s separate box arrangement.

He’s basically saying we’d be more comfortable buying a new $99 Apple TV box every year or two than burning close to $2,000 on a new Apple-branded television hardware. In addition to a longer refresh cycle in the TV set making business, premium content deals pose another major obstacle to Apple releasing a television set of its own.

If carriers and content owners can be tricked, bribed, sued, or otherwise made to see the light and wisdom of higher revenue per subscriber, the TV Done Right will descend from Heaven in the form of a next generation Apple set-top box, not a TV set.

As you’ll recall, he recently predicted Apple will release an updated Apple TV box with a TV app store as early as next year. As we reported this morning, Apple may have inadvertently hinted at TV apps by running banners which promote holiday apps and games in the Apple TV’s Movies menu.

No matter how you look at it, the living room is a tough nut to crack.

Many have tried and failed at delivering a consistently formatted integrated television experience. Google TV has not taken off in a big enough way. Its partners on the effort make little, if any, money selling Google TV boxes. In fact, the search firm is now unloading Motorola’s set-top box unit as it focuses on smartphone and tablet competition with Apple.

Besides, Microsoft with its Xbox console has pretty much done more innovation in this space than anyone else. The rumor-mill has it that the Windows maker is now looking to release an inexpensive Xbox TV set-top box hardware next year aimed at streaming and content consumption.

While Apple keeps on insisting that the Apple TV is merely a hobby, every now and then executives for the California firm drop hints indicating willingness to pursue the ultimate living room device.

The comment confirms nothing if not a vague possibility of future Apple TV features, at best.

Gassée acknowledges as much, saying Apple’s boss may be talking about the topic of Apple television simply in order to “provoke Google offsides into yet another embarrassing Google TV moment”.

I’m not sure I agree with his assessment because Cook has no history of deliberately misleading competition. Offering another explanation, Gassée writes that Cook’s comment indicates“he’ll continue to invest talent and money until the TV obstacles are finally surmounted” (and I approve his message).

No supply chain lead has surfaced so far to support the thesis that Apple is building a full-blown television set though numerous rumors and pieces of information help paint the big picture. 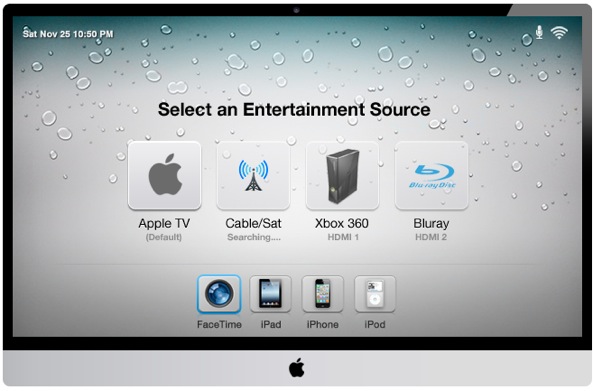 Apple was rumored to be considering IGZO panels in future products. Then there is the case of both Apple and Foxconn bringing some of the Mac production back home from China, which could be a prelude to producing big screen TVs for the company here in the US.

Some watchers also point to Apple’s enormous super data centers that are cropping up all over the world as a definite proof that the company basically wants to become the 21st century broadcaster.

Be that as it may, until the mythical iTV arrives we’ll have to do with concept renders.

Of course, all of this is pure speculation and you’re welcome to add up to the conversation down in the comments.