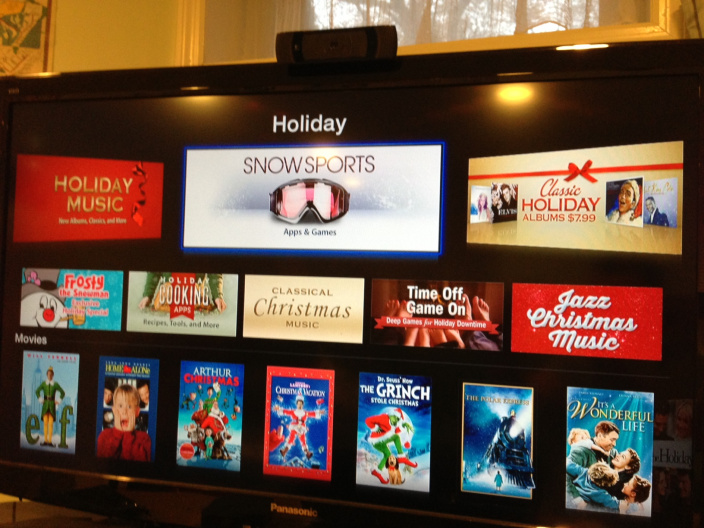 Ahead of this year’s WWDC, BGR editor Jonathan Geller claimed Apple would release a software development kit allowing developers to write third-party apps for the $99 Apple TV set-top box. His prediction was incorrect because to this date the hardware runs just a few stock apps as Apple’s been consistent in disregarding calls to open up the platform to third-party programmers.

Gene Munster, arguably the biggest proponent of a standalone Apple television set, has no doubt in his mind that apps are coming to your telly, recently predicting Cupertino will offer an updated Apple TV box with a TV app store as early as next year. In fact, Apple may have inadvertently leaked this capability because the Apple TV’s Movies menu has been spotted running banners that promote holiday apps and games…

As you can see for yourself on the top image, the banners for sports games, shopping apps and cooking apps all somehow made their way into the Movies < Genres < Classics < Holiday Music, Movies, and More section of the Apple TV menu.

As Mac OS Ken explains, hitting any banner produces an empty page which could be a placeholder for the real thing. If you ask me, this is probably a glitch in the system. For all we know, these banners may advertise existing apps for iPhones and iPads.

While I have no doubt that third-party apps are coming to your television by way of an Apple TV software (or hardware) update, I refuse to believe Apple would “leak” such a high-profile capability in such a cheap manner.

When Apple flips the switch on apps, will it be a game-changer for the hockey-puck console?