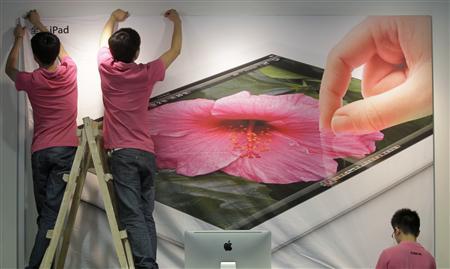 China is going nuts over the iPad as Apple’s tablet commands more than 71 percent of sales in China. That’s welcome news for Apple which has watched Samsung and other competitors erode its once secure market share. Apple’s lead in tablet sales among Chinese consumers has remained steady over the past six months.

The latest third-quarter market figures show Apple’s position slid just one percent from the previous period. It’s unclear, however, how long China’s love affair with the iPad will last. Two home-grown tablet firms are #2 and #3, with Samsung a distant fourth…

While more than seven out of each ten tablets purchased in China are iPads, there is competition – even if they are not breathing down Apple’s neck. China’s Lenovo has 10.5 percent of the tablet market, while locally-based Ereneben has 3.6 percent of the market. South Korea’s Samsung is trailing right behind with 3.5 percent.

Lenovo recently made the news when it was reported the company could soon become the top seller of smartphones in China.

Reuters relays an Analysys International survey claiming that the tablet market in China has grown 62.5 percent compared to the same period in 2011. Some 2.6 million tablets were sold in China during the third quarter, one million more than last year.

Demand for the iPad recently received a boost when it acquired the “iPad” name in China for $60 million from that country’s ProView. Earlier this month, research firm IDC linked the deal with an 80 percent upsurge in iPad sales.

All is not rosy for Apple’s iPad elsewhere.

Depending on which research firm, Apple is hanging onto most of global tablet sales by its fingertips or dangling by a thread.

Globally, that picture may not get brighter for Apple.

Android now holds more than 44 percent of tablet shipments. One analyst, Sameer Singh of Finvista Advisors, sees a bevy of Android-powered tablets overwhelming the iPad in 2013.

This could put Apple in the place of its rivals, doing some Silicon Valley spinning. Instead of the percent of market share, expect Apple to talk up its ability to manufacture more tablet units.

Can the iPad hold onto the lead for the tablet market, or is the army of Androids too large?