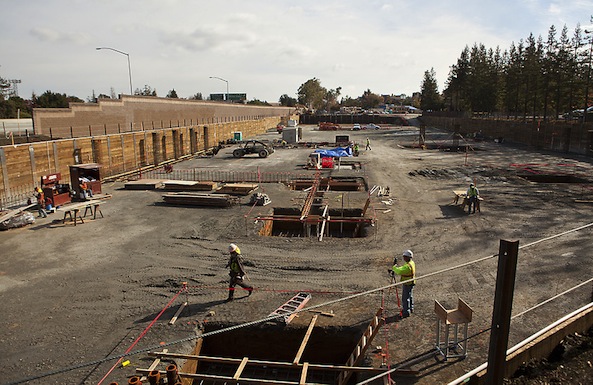 Apple has began work on a custom two-building campus on the north side of Stevens Creek Boulevard in Santa Clara, a few miles outside of Cupertino city limits. This is the company’s first foray into the Silicon Valley city.

…Apple and Peery Arrillaga declined to discuss the development and leasing deal. However, multiple sources with direct knowledge of the transaction told this newspaper that Apple has leased nearly 296,000 square feet from Peery Arrillaga in a deal that included demolition of existing buildings.”

Todd Shaffer, a senior vice president with the Santa Clara office of reality firm Cornish & Carey Commercial Newmark Knight Frank, says that what Apple is doing is one of the biggest expansions he’s ever seen for a company.

And this campus is only going to be a fraction of the size of the one Apple is building in Cupertino. There, Apple is looking to put up a 4-story, 2.8 million square foot curved-glass building we all know as the iSpaceship.

Tim Bajarin of Creative Strategies makes an interesting observation regarding all of the construction, “You cannot underestimate Apple’s ability to achieve innovation. Their products are in demand. They continue to hire.”

The larger building on the Santa Clara campus is expected to be done by mid-2014, but there’s no word on when construction on the second one will commence. The much larger Cupertino campus should be done by 2016.