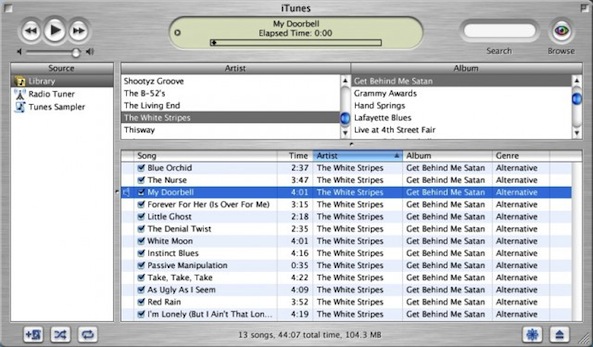 The first version of iTunes was released nearly 12 years ago in January of 2001. There was no iPod yet, or content store, it was merely pitched as awesome jukebox software with the tagline “Rip.Mix.Burn.”

Since then, iTunes has undergone a number of transformations. And with version 11 of the software due out any day now, Ars Technica’s Jacqui Cheng wanted to take a look at its many faces over the years…

The article takes a look at every major iTunes release, from version 1 to 10. The entire thing is worth the read, as it really gives you an idea of how much the software has changed. But here are a few notable points:

After iTunes 7, there really hasn’t been any significant changes in the software. iTunes 8 brought the Genius feature, 9 added Home Sharing, and 10 added Apple’s now-defunct social networking service known as Ping.

So what does iTunes 11 have in store for us? Well from Apple’s preview back in September, we know that its going to have a revamped UI, a redesigned Mini player, better iCloud integration and other new features.

The update was supposed to launch in October, but Apple pushed it back to November to make sure they “get it right.” According to recent reports, though, it could literally drop any day now. So stay tuned.

We’ll let you know as soon as it hits.