Last we heard, Apple delayed iTunes 11 until end of November because the team needs more time “to get it right”. With nine days until the deadline, Apple has now emailed record labels and artists, asking them to upload pictures and galleries of their artists to iTunes for use in the new Music Store layout that will debut with iTunes 11. The company specifically warned content owners that iTunes 11 “is about to be released within the next days”, indicating it’s about to hit the deadline…

MacRumors relays a post by one of its forum members who also happens to be both a musician and label owner. 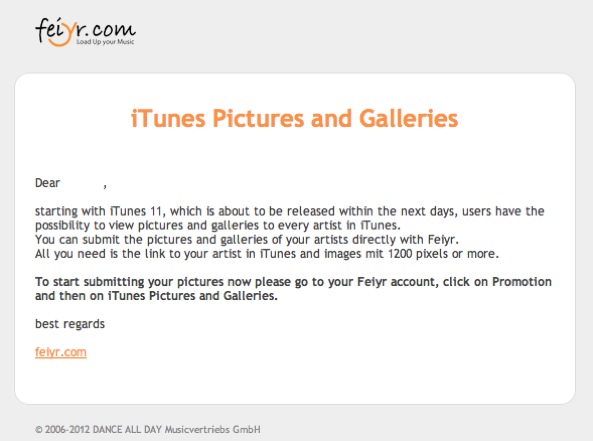 The email message came from Feiyr, a digital music distribution service which acts as an interface between rights owners and digital retailers such as iTunes, Amazon and others.

As the message contents reveals, artist pages in the redesigned iTunes Store in iTunes 11 will have pictures and nice photo galleries.

Last week, Spotify rolled out a beta of its web-based music player (unfortunately, it’s Flash-based) while Google in a massive deal added 5.5 million tracks by artists from 35 European countries.

Eddy Cue, Apple’s SVP in charge of iTunes, content deals and iCloud, has been touring iTunes partners as well.

The result of his work: iTunes Music Store launched in Russia and the Australian hard rock band AC/DC finally relented and put its rich catalogue for sale on iTunes.

Are you looking forward to iTunes 11?

I’m looking forward to it and hope it’ll be a speed demon – we don’t need more bloat.