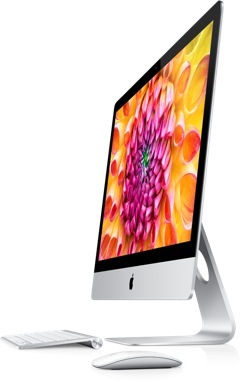 Your dream desktop machine is around the corner. The thinner, redesigned all-in-one iMac lineup introduced last month will be available starting this Friday, November 30, Apple confirmed today. The 21-inch model comes in two flavors, with upgrade options including a faster Core i7 chip and a Fusion Drive. The top-of-the-line 27-incher will ship next month and includes up to a 3.2 GHz quad-core Intel Core i5 with Turbo Boost speeds up to 3.6 GHz and Nvidia’s GeForce GTX 675MX graphics. The 21.5-inch model will be available through the Apple Online Store, Apple’s retail stores and select Apple Authorized Resellers. The 27-inch iMac will be available for order through the Apple Online Store and will begin shipping in December…

Apple’s SVP of Worldwide Marketing Phil Schiller called the eight-generation iMac in a media release “the most beautiful iMac we have ever made”.

The 21-incher is available in two configurations.

Both configurations have 8GB of 1600MHz DDR3 memory, Nvidia’s GeForce graphics with 512MB of GDDR5 memory (640M on the base model and 650M on the other) said to deliver up to 60 percent faster performance and a 1TB 5400RPM hard drive that on the pricier model can be upgraded to a Fusion Drive.

The 27-inch dream desktop is also available in two configurations.

The Fusion Drive is a new storage option developed by Apple which combines 128GB of flash storage with a standard hard drive, creating a single storage volume that intelligently manages files to optimize read and write performance.

Apple notes the new industrial design that has allowed for the iMac’s dramatically thinner appearance.

Redesigned from the inside out, the new iMac packs high performance technology into an aluminum and glass enclosure that measures just 5 mm thin at its edge and features a reengineered display that reduces reflection by 75 percent.

The manufacturing process involves friction-stir welding, a process that doesn’t require the materials to be melted for them to be joined.

The Register has more on that:

Instead it softens and merges the edges by mixing the two materials under frictional heat. The result is a smoother join of very high strength, and the process is quicker and uses less energy than traditional welding techniques.

Friction-stir welding also allows for a “seamless, precise and superstrong join”, according to Apple. The company also laminated the display directly to the glass to yield a 45 percent thinner display system.

Do you plan on buying one of these beauties?