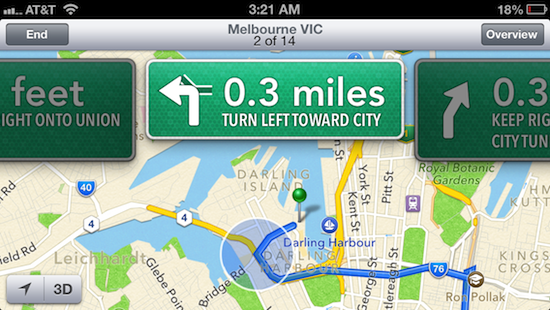 Apple has taken a lot of heat over its new Maps application in iOS 6. Users have complained that it’s inaccurate, buggy, and doesn’t have anywhere near the international support that Google Maps has.

Well it looks like Apple has made some progress on the latter front. Last night, reports started coming in that the Cupertino company has activated turn-by-turn voice navigation for its Maps app in Australia…

9to5Mac points to several tweets from iOS 6 users in the country who are confirming that the long-awaited service is finally available. The turn-by-turn feature was supposed to launch in Australia last month.

Nevertheless, it’s live now. And judging from initial reactions, it seems to be working fairly well. A few users have noticed, however, that there are missing/inaccurate suburb names in and around Melbourne.

For those of you in Australia looking to try this out, just open up your iOS 6 Maps app and give it a whirl. Since Apple activated the service from its end, there’s no need for users to install any updates.