As mobile phones become smarter, Samsung and Apple continue to rule the landscape as the world’s best-selling cell phone brands. As for Google’s Android platform, it now controls more than seven out over every ten smartphones in consumers’ hands, a new report suggests. Both Samsung and Apple controlled 46.5 percent of the smartphone market in the third quarter.

The iOS-Android duopoly had a commanding 86 percent platform lead in the third quarter, according to research firm Gartner. Individually, the South Korean smartphone maker held 32.5 percent of the market while Apple held 13.9 percent, the researcher announced Wednesday. Android now controls an astounding 72.4 percent of the mobile operating system market for smartphones, up from 52 percent in the year-ago quarter…

The Samsung-Apple lock on smartphone sales left “a handful of vendors fighting over a distant third spot”, Gartner analyst Anshul Gupta said. Nokia fell to #7 from #3 with HTC and RIM tentatively hanging onto their current rankings.

Gartner expects the Cupertino, California company to have its strongest quarter as China joins the nations launching the iPhone for the holiday period.

The iPhone accounted for 5.5 percent of all cell phone sales worldwide, a jump from 3.9 percent a year ago, AppleInsider observes. 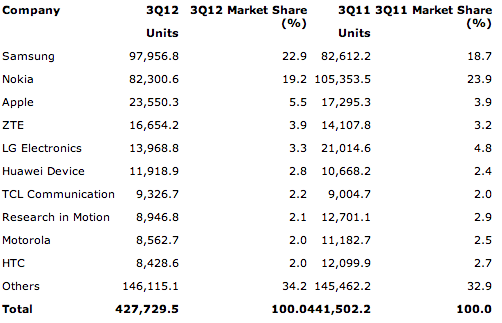 In the continual race between iOS and Android, Google remains in the lead with 72.4 percent of the OS market, according to the research firm. That’s a nearly twenty percent increase from the same quarter in 2011. Gartner’s figures mesh with those released earlier this month by IDC.

The rival research firm announced Android-based smartphones accounted for 75 percent of sales in the third quarter. Apple held on to second with 14.9 percent of the market.

Overall, the trend for mobile users is away from standard “feature phones” and toward smartphones.

In China, sales of mobile phones grew driven by sales of smartphones, while demand for feature phones remained week.

In mature markets, we are finally seeing replacement sales pick up with the launch of new devices in the quarter.

We could be looking at the end-game for smartphones where Android handsets control a massive lead, with Apple playing to a profitable niche.

What’s your read on Gartner’s data?

Is there an end in sight to Android’s growth?