Apple doesn’t get a whole lot of respect from the tech world when it comes to innovation. The company is seen more as a re-innovator than an innovator, as it typically builds its products on top of previous inventions.

But according to a new report by Global management consulting firm Booz & Co, Apple is the most innovative company in the world. The iPad-maker finished ahead of the likes of Google, 3M and its rival Samsung… 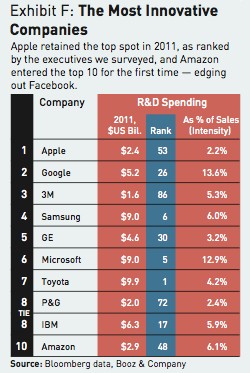 This is the management consulting firm’s eighth annual survey, and the third year in a row that Apple, Google and 3M landed in the No. 1, 2 and 3 spots. Samsung, on the other hand, climbed from #7 to #4 this year.

It’s interesting to see Apple in the top spot, despite the fact that it spent the second least amount in research and development this year at $2.4B. By contrast, Samsung and Microsoft both spent $9B on R&D costs.

Fortune points to the Booz & Co report for more insight into their methodology (via TUAW):

“Year after year, our Global Innovation 1000 study has demonstrated that it is not how much companies spend on research and development that determines success — what really matters is how those R&D funds are invested in talent, process, and tools.”

In addition to Samsung’s three-spot jump, Amazon found itself in a top 10 spot on the Global Innovation 1000 list for the first time ever, knocking out Facebook. Booz & Co says the social network has lost its initial luster.

Whether you agree with the list or not, it’s hard to deny that Apple has found a winning formula. The company recently announced that it sold 3 million tablets last weekend, more than most companies do in a quarter.