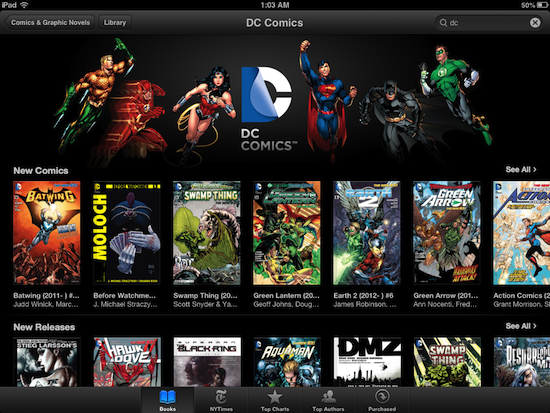 DC Entertainment, one of the top comic book publishers in the world, announced yesterday that its entire line of DC comics are now available in digital e-book format. Fans of the comics will be able to find them in Amazon’s Kindle Store, the Barnes and Noble Nook Store, and of course the iBookstore…

From the press release (via MacRumors):

This is actually a pretty big move by DC. Content owners are struggling right now with the digital revolution. The music industry is coming around, but the folks in Hollywood are still clueless. And right now, DC is the only comic book publisher to offer its lineup across all major e-book platforms.

“As e-readers and tablets continue to explode in popularity it’s important for us to offer consumers convenience and choice in how they download digital comics and graphic novels and these new distribution deals with the top three e-bookstores do just that,” said Jim Lee, co-publisher, DC Entertainment. “We’re very excited to work with Amazon, Apple and Barnes & Noble to bring bestselling DC Comics and Vertigo periodicals to their e-bookstores.”

You can find all of DC’s newly-added titles in the iBookstore, in the Comics & Graphic Novels section. And for those wondering, yes it will continue to offer its comics through the DC and Vertigo apps, as well as comiXology.

Anyone psyched about having more DC comics in the iBookstore?