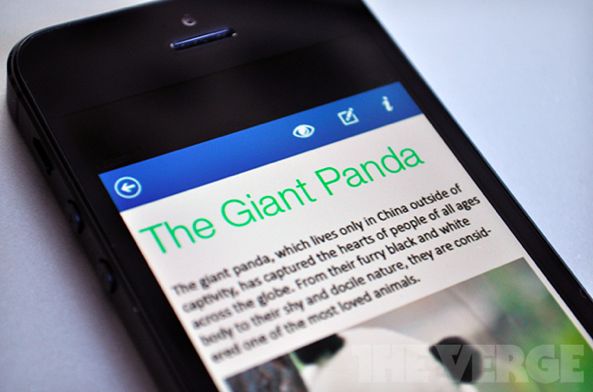 The Verge in an exclusive report this morning offers a detailed look into Office Mobile, a long-rumored version of Microsoft’s productivity suite, said to hit iOS and Android devices in early 2013, with the iPhone and iPad version hitting the App Store first. The suite, the publication has it, will apparently include free viewer apps that will require a Microsoft account. Limited editing functionality will reportedly be available with an Office 365 subscription. More tidbits right after the break…

Tom Warren, reporting for The Verge:

Microsoft will allow iOS users to purchase an Office 365 subscription within the app, or let organizations distribute codes to enable Office Mobile editing for users.

The apps will allow for basic editing, but we’re told this won’t go very far in attempting to replace regular full use of a desktop Office version.

A Microsoft spokesperson would only confirm that “Office will work across Windows Phone, iOS and Android”.

So that’s why they’re making Office for iOS 🙂 “@theloop: Microsoft: ‘iPad’s don’t have a foothold in businesses’ loopu.in/PX2WvH”

Of course, apps like Google-owned Quickoffice and other Office alternatives already offer full editing functionality and compatibility with the Office file format.

On the other hand, such third-party solutions are inadequate to large organizations seeking to implement the official on-the-go Office functionality into their workflow, which usually depends on desktop Office integration with Microsoft’s online services and server products.

I am, however, concerned about Mobile Office not offering the full experience.

If Microsoft is really looking to provide viewer apps with limited editing functionality just to push folks into using its full-blown desktop Office suite, a lot of people could be disappointed.

Do you think you’ll be buying Office Mobile?