Compared to the phased-out 10W adapter, Apple’s new 12W power brick enables faster charging times for iPhones, iPads and iPods. Specifically, the two extra watts of power shave up to 45 minutes off the iPad charge time. What’s really interesting is that in an article 9to5Mac ran a week ago it claimed “Apple also told us that the iPad mini would come with a 12W adapter as well”.

This doesn’t seem to be true, if a report by MacRumors is anything to go by. The publication relays a note from its reader who was able to purchase an iPad mini from his local Walmart yesterday and confirmed that it came with the smaller 5-watt adapter.

It doesn’t appear to be an isolated incident. Additionally, iPhoneinCanada shortly following the iPad mini keynote observed that Apple’s own shopping app depicted the 5-watt adapter as part of the iPad mini package contents…

With the iPad mini’s battery having three times the capacity of the iPhone 5’s battery, charging the iPad mini through the included 5-watt power adapter would take considerably longer than charging an iPhone.

If, however, the iPad mini is capable of drawing higher wattage, users may prefer to charge the device through a larger 10-watt or 12-watt adapter intended for the full-size iPad.

iPhoneinCanada previously reported of the 5-watt adapter listed as the iPad mini package contents in the Apple Store app. Our own Cody Lee noted yesterday that the iPad mini box clearly lists the smaller adapter (though it also mentions iTunes 11 which won’t be released for a month). 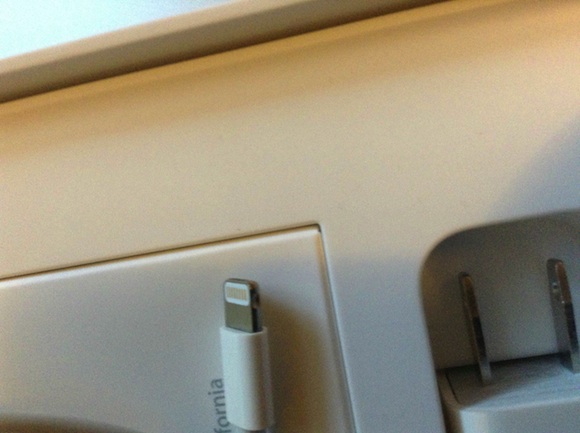 Apple’s clueless PR person may have provided 9to5Mac with incorrect information, which is one fairly distant possibility. Another is that author Jordan Kahn didn’t get his facts straight. It’s also possible Apple changed its mind last minute, which wouldn’t be a first for the company.

I can also see the iPad mini shipping with the smaller 5-watt adapter only in certain countries, though it’s doubtful. Truth be told, such a move wouldn’t be out of character for Apple in light of the its overpriced Lightning accessories.

If that’s the case here, you’ll need to shell an extra $19 for the 12W adapter to cut down your iPad mini charge time. A ballsy move Apple, indeed.

We’ll know for sure when the device lands on store shelves in the United States and elsewhere tomorrow.

What do you think, should have Apple include the juiced up 10-watt adapter with the iPad mini?