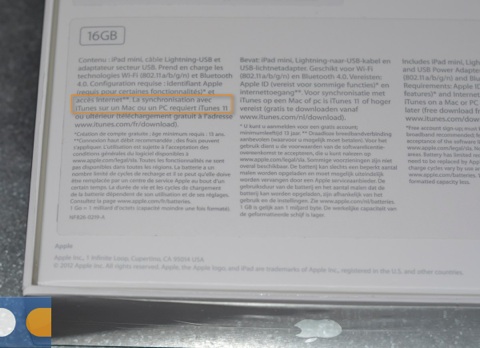 As we told you this morning, some customers started receiving their iPad minis today, despite the fact that the tablet doesn’t officially launch until Friday. This gave us early unboxing photos and new details about the product.

One of those details is that on the back of the iPad mini’s retail box, it says that the tablet requires iTunes 11 for sync. But, as we all know, Apple has pushed its iTunes 11 release back to November. So what’s the deal?

According to our friends over at iGen, who sent us the tip, it looks like Apple was originally hoping to ship iTunes 11 in time for the iPad mini’s release. But in order to “get it right,” the release has been pushed back a few weeks.

Don’t worry though, iGen says that their mini actually synced up with the current version of iTunes without a hitch. However, they did note that it didn’t display an icon for the tablet. So maybe Apple will release a small update to fix this.

While this is a small detail, it’s interesting that Apple felt so strongly that iTunes 11 wasn’t ready, that it refused to ship it despite it being listed as a “requirement” on millions of iPad mini boxes. Where was this refrain on iOS 6 Maps?

The French blog also notes that the iPad mini ships with a 5 watt USB power adapter, instead of a 10 watt. And the tablet comes with iOS 6 installed, instead of some 6.* variant. Needless to say, we can’t wait until our minis come in this Friday.