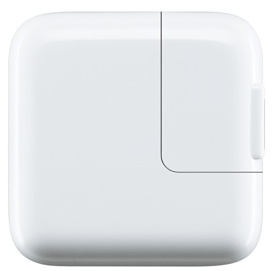 Today, a pair of Apple-branded Lightning-enabled accessories has cropped up on the online Apple store (unofficial ones for half the price are already here). With them came a new iPad charger that now provides twelve watts of power instead of ten watts of power for the previous-generation adapter.

The 12W USB adapter (a $19 value) also replaces the older unit, now removed from the store. It essentially allows users to charge their iPads, iPods and iPhones a bit faster than with the previous adapter…

It’s interesting that Apple is including this adapter only with the fourth-generation iPad and iPad mini.

Apple says the new 12W adapter works with the iPhone 4S/5, the fifth-gen iPod touch and seventh-gen iPod nano and all iPad models except the original one. Put simply, it will charge all iPhone and iPod models with a Lightning connector.

9to5Mac pressed the company on the matter and got this reply:

We don’t have an exact percentage of how much faster it would charge but you should see an increase in speed.

“Apple also told us that the iPad mini would come with a 12W adapter as well”, author Jordan Kahn writes.

The new, more powerful adapter will certainly help your iPad with Retina display which has notoriously long charging times due to its massive battery providing 42.5 watt hours. For comparison’s sake, the iPad mini’s battery is rated at 16.3 watt hours.

You may want to consider this adapter even if you don’t plan on buying an iPad with Retina display or iPad mini because it will charge other supported iOS devices faster than the phased-out 10W iPad charger used.

You should especially notice a difference in charge times if you’re using the adapter which came included with your iPhone.