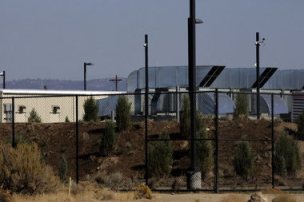 Apple purchased a 160 acre plot of land in Prineville, Oregon from Oregon’s Crook County back in February of this year for $5.6 million. And it immediately built a 10,000 square foot modular data center on the property.

Well this morning, reports are coming in that Apple has started work on its main data center at the Oregon location. It’s begun clearing and flattening land to make room for one of two, 338,000 square-foot buildings…

OregonLive (via The Next Web) has the scoop:

“Apple has begun work on the first, $68 million phase of its new Prineville data center, clearing and flattening land for the one of two, 338,000 square-foot buildings atop the bluff that overlooks town. Each building is more than twice the size of a typical Costco store.

The price tag covers the cost of one building and two “data halls” inside. Plans filed with the city and Crook County last summer call for adding a second building and, eventually, 14 more data halls.”

Apple hasn’t said when the first building will be up and running, or what the location’s specific purpose will be, but it has said that construction of the buildings will employ hundreds, and the actual data center “dozens.”

The company also details its plans to use clean energy at the site on its website:

“Our newest data center, located in Prineville, Oregon, is just getting under way and will be every bit as environmentally responsible as our Maiden data center. At Prineville we have access to enough local renewable energy sources to completely meet the needs of the facility. To achieve that goal, we’re working with two local utilities as well as a number of renewable energy generation providers to purchase wind, hydro, and geothermal power — all from local sources.”

Apple already has data centers in Maiden, North Carolina, and in northern California. And word has it that it’s looking to build another $1 billion data center in Reno, Nevada. It’s believed that Apple chose the Prineville, Oregon location for its modest energy prices and significant tax breaks.