In what appears to be a repeat of the DST software bug – and we’ve been here plenty of times before – some owners of Apple’s new iPhone 5 report that their handset is showing incorrect time and/or day. Several people on Apple’s discussion forum decribe their device as displaying times and dates that are days, even weeks, ahead or behind actual ones. The issue appears to manifest itself on devices that have automatic date and time setting feature enabled. Specifically, owners of a Verizon iPhone 5 appear to be affected the most…

A thread on Apple’s discussion forum dates back to September 24 and at press time nearly amassed nearly 400 responses.

So, I activated my Verizon iPhone 5 Saturday. Very much enjoying it. Woke up yesterday and was very confused because my phone thought it was 8/26/12 and 30 minutes later than the actual time. I reset network settings and it self resolved…until this morning.

I woke up and looked at my phone and had a melt down because my alarm never went off. I hurriedly got ready and looked at the microwave as I ran out, and it was 30 minutes earlier than my iPhone said.

It’s more than just an inconvenience: the wrong time and/or date clashes with time-sensitive apps, like iMessage. A number of other posters reported this time-shifting issue.

A few insist Apple and Verizon are aware of the issue, but gave no specifics. If it’s an iOS 6-related issue, it should be easily fixable with a software update. 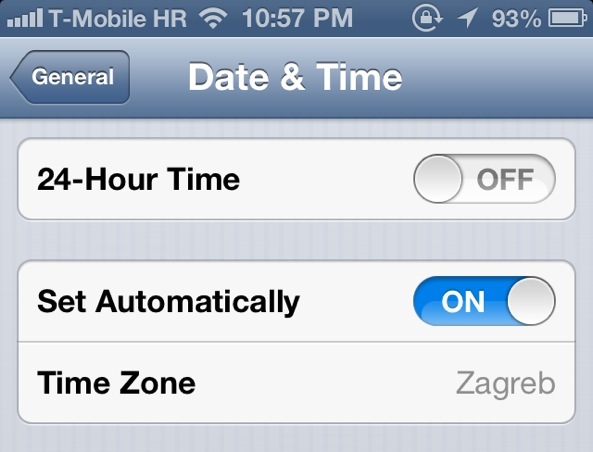 However, the fact that no one observed the time-shifting phenomenon on iPhones other than the iPhone 5 running iOS 6 indicates the Verizon network – and partially iOS 6 – are to blame. Turning off location services for Time Zone in Settings doesn’t help, but disabling the automatic time setting does, thus pointing to a problem on Verizon’s CDMA network end.

In order to operate properly, all CDMA cell towers transmit a time signal based on data from an on-site GPS receiver, allowing the network to stay in synchronization. It is possible that either Apple’s handset is somehow misinterpreting the time signals, or timing data from certain Verizon cell towers is faulty, though at this point the theories are mere conjecture.

I’m curious as to whether your device suffers from the time-shifting bug. To check it out, go to your iPhone’s Settings and enable the Set Automatically toggle under General > Date & Time.

Then, look for any anomalies over the next day or so and please share your observations with others down in the comments.

By the way, did you know you could use the stock iOS Weather app as a world clock?