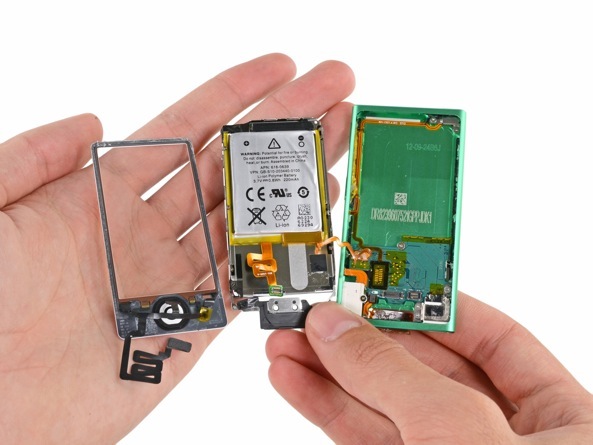 Solutions provider iFixit tore apart Apple’s seventh-generation iPod nano which was released alongside the iPhone 5 and the fifth-generation iPod touch at the September 12 media event. In addition to a Broadcom Bluetooth module and a touchscreen controller from Texas Instruments (whose mobile arm could be acquired by Amazon), the music player also packs in five Apple-branded mystery chips and scores a lower repairability score than the iPhone 5…

NAND flash storage has been identified as a 16 gigabyte Toshiba THGBX2G7D2JLA01 module. Bluetooth and FM radio is managed by Broadcom’s BCM2078KUBG package while a a touchscreen controller comes from Texas Instruments (343S0538), in addition to a NXP Semiconductors 1609A1 module.

The music player rocks a 3.7V, 0.8Wh, 220mAh battery, more than twice that of the previous-generation iPod nano’s 0.39Wh rating.

The music player sports “an adorable plastic pull tab underneath the battery”, but the adhesive holding down the battery is “much too strong for the feeble pull tab to break through”. 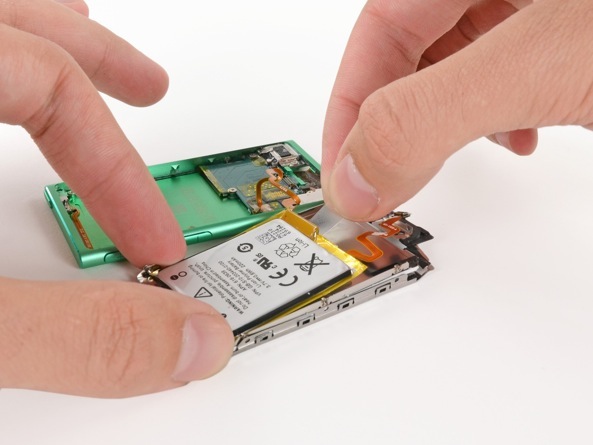 They also note that the icon on the media player’s home button is round rather than square, presumably in order to match its circular icons.

That’s attention to detail for you.

Reverting to the tall design utilized in previous generations makes the iPod easier to grip, and thereby easier to use. The designers threw the 6th Generation’s clip out the window, so the new Nano is that much thinner.

The repair experts note that the battery, Lightning connector and volume controls are all soldered to the logic board, making repairs tougher than necessary.

If you bend your Lighting connector or break your volume control, you’re stuck with replacing the whole suite of components.

The fact that the battery is adhered to the back of the display doesn’t help with repairs either. Furthermore, pulling out the logic board makes the battery, button cable, Lightning connector and headphone jack all come with it.

Fortunately, the LCD and digitizer glass are not fused together so you will be able to replace either component separately.

iFixit also analyzed the innards of the new iPod touch, finding a weaker home button and a cheaper display assembly compared to the iPhone 5. 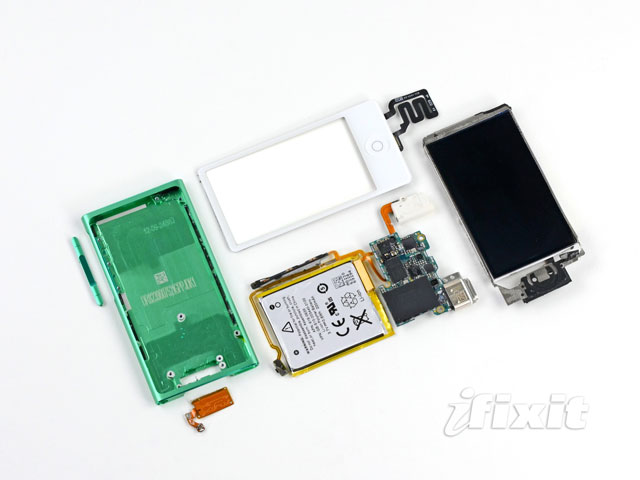 The new iPod nano is completely renanoed: it’s got a 2.5-inch widescreen display that plays video and detects multitouch input, a built-in accelerometer and Bluetooth 4.0 (letting you access your music wirelessly with Bluetooth-enabled speakers, headphones and car stereos).

The device carries a model number of A1446, is available in seven colors and comes with sixteen gigabytes of storage.