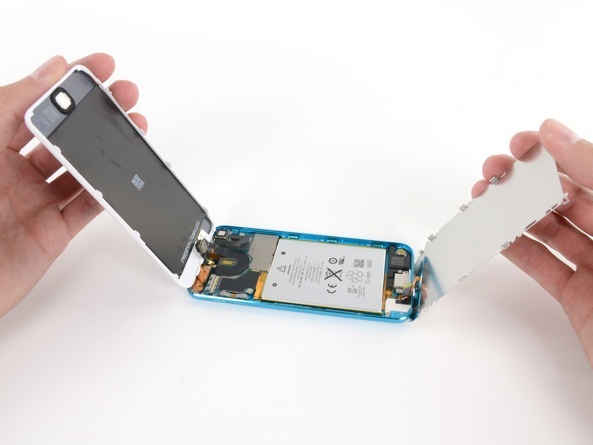 Apple’s fifth-generation iPod touch, which debuted alongside the iPhone 5 during the September 12 keynote, is on sale now, first reviews are great and already the wizards at iFixit have done what they do best: they tore apart the device to peek under the hood and analyze its innards.

Unlike the iPhone 5 that runs the latest A6 chip with 1GB of RAM, Apple’s ultra-thin (just 6.1mm) media player packs in the Apple-designed A5 processor with 512MB of Hynix-supplied RAM. The same silicon also powers the iPad 2 (the iPad 3 runs a souped up variant labeled the A5X). Perhaps unexpectedly, the new iPod touch has a weaker home button than that on the iPhone 5…

Other tidbits include NAND flash from Toshiba, meaning Apple passed on Samsung and turned to other suppliers for both the iPod touch’s storage and on-chip RAM. Note that Apple’s been distancing itself from Samsung on the display front as well, although the South Korean conglomerate continues to build Apple’s in-house designed processors at its facility in Austin, Texas.

Broadcom supplies the BCM 5976 touchscreen controller and Texas Instruments won a touchscreen system-on-a-chip contract (the 27AZ5R1 module). WiFi module is provided by Murata (the 339S0171) and the three-axis gyroscope is from STMicroelectronics (the AGD32229ESGEK module). 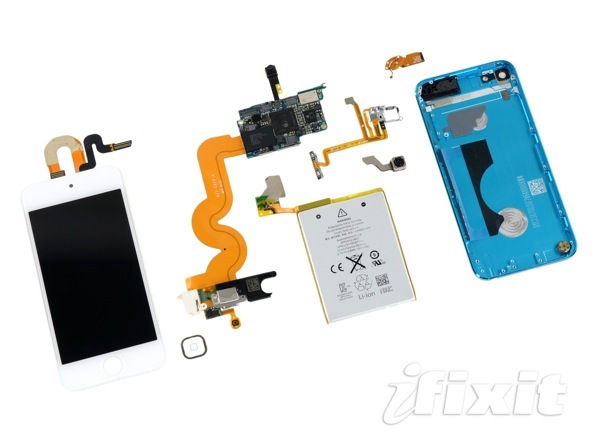 The impossibly thin iPod touch is quite a marvel of engineering.

As for the display, even though the iPod touch packs in all of the display technologies Apple uses for the iPhone 5, the manufacturing process is being described as cheaper.

When comparing the Touch to the iPhone 5 display assembly, it’s apparent that this is a much simpler, cheaper design, despite Apple claiming the two have very similar functionality.

The fourth-generation iPod touch’s display was of a noticeable lower quality compared to the iPhone 4/4S, especially when viewed at an angle.

Here’s a side-by-side comparison of the iPhone 5’s and iPod touch’s profile.

The backside iSight camera on the new iPod touch is essentially a rehashed version of the five-megapixel module found on the previous-generation model, capable of shooting 1080p video at 30 frames per second.

As for repairability, the new iPod touch scores 3 out of 10 (versus 7 out of 10 for the iPhone 5), largely due to hard-to-manage ribbon cables on the logic board and absence of external screws.

In case you thought that a quick zap with the heat gun and a gentle pry is all it would take to get into the Touch, think again! There are several clips and adhesive holding this iPod together.

The disassembly also found the volume buttons, microphone, LED flash and power button all connected through the same ribbon cable, which easily peels from the rear case.

The shift to a single ribbon cable is more cost-effective for the manufacturer, but unfortunately it has a negative impact on repairability. Cables connected to the logic board run over the top and connect on the bottom, making it difficult to remove the board or disconnect the cables.

iFixit notes that even though repair is not impossible, “it’s certainly going to be difficult and expensive if one component breaks”. The teardown experts were also surprised to find a weaker home button compared to the iPhone 5, largely stemming from a rubber-membrane design.

In our recent iPhone 5 teardown, we praised Apple for redesigning a stronger home button. We were somewhat disappointed with the weaker, rubber-membrane design of the iPod Touch’s home button.

I think the new iPod touch is a marvel of engineering and the best media player there is. I’d say that a weaker home button, cheaper display assembly (though image quality is on par with the iPhone 5) and low repairability score  are all necessary trade-offs due to its impossibly thin design, ones that not many people will notice anyway.

For more, check out Jeff’s unboxing video and another one depicting the iPhone 5 versus iPod touch boot test. Also, stay tuned for his review, coming up later today.