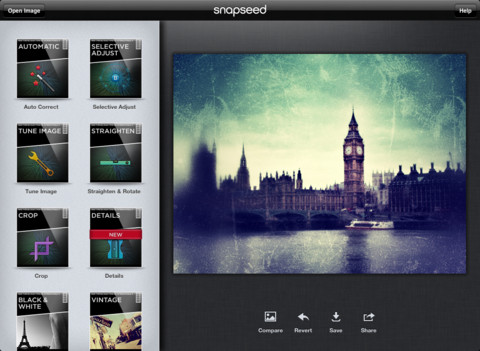 When Google announced last month it was acquiring Nik Software, the brains behind Snapseed, a popular Photoshop alternative on the iOS platform, Senior Vice President of Engineering Vic Gundotra made a promise on Google+ that “we’re going to continue offering and improving Nik’s high-end tools and plug-ins”. The search giant has kept its word as it pushed an update to Snapseed for the iPhone and iPad on the App Store, bringing long-awaited iOS 6 and iPhone 5 compatibility…

Snapseed for iOS version 1.4.2 now supports iOS 6 and the iPhone 5.

Flickr support has been temporarily pulled due to a violation of the Apple App Store Guidelines. According to release notes, “We are working with Flickr and Apple to find a solution to bring Flickr support back to Snapseed”.

Snapseed is a five-buck download that supports both the iPad and iPhone/iPod touch natively. A version for the Mac will set you back $20. Snapseed is also available on Windows. Snapseed on Android is likely in the works, as Android-totting Gundotra’s image post on Google+ with the Snapseed tag indicates.

Here, a few screenies from Snapseed running on the iPad.

If you ask me, Snapseed has got to be one of the best prosumer image manipulation software available.

I happen to use Snapseed on my iPhone and iPad on a regular basis, in combination for the indispensable Camera+ app (which as of recently works on the iPad) and Camera Awesome, also supporting iPad now.

Are you a heavy Snapseed user yourself?