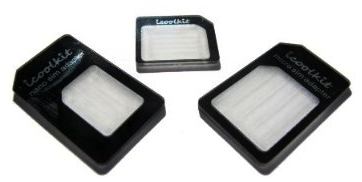 If you just purchased an iPhone 5, then you know first hand how much smaller the new Nano SIM is when compared to the already diminutive Micro SIM it replaces.

But what if you want to use the new Nano SIM in an older phone, like the iPhone 4, or the iPhone 4S? Obviously you can’t just stick it in there.

Your best option is to purchase an adapter that can be cheaply had on Amazon for $1.99. That’s exactly what I did, and here’s the video to prove it.

The package I purchased included the following:

Seeing as I don’t own any mobile phones outside of the iPhone 4, iPhone 4S, and iPhone 5, I’m not sure if any other phone still uses the large Standard SIM card, but apparently so, because this package included two adapters specifically designed for phones with Standard SIM slots.

The most important part of the package for recent iPhone owners is the Nano SIM to Micro SIM adapter. That’s the adapter that will allow you to use a Nano SIM in the iPhone 4 and iPhone 4S.

It’s really not rocket science or anything; you simply take the Nano SIM, place it in the Micro SIM adapter, and place your newly created Micro SIM into the Micro SIM card tray.

If you’re an AT&T iPhone 5 user, then you’ll be able to take the Nano SIM out of your iPhone 5, and use that SIM to enable AT&T service on your older iPhone 4, iPhone 4S, etc. If you have an iPhone 3GS, 3G, or 2G, then you can use the Standard SIM adapter.

The included cutouts are templates that you can use to trim existing SIMs to fit specifications – handy if you’re trying to cut down an existing Micro or Standard SIM down to Nano SIM size.

I ordered my adapter back on September 29th, and it arrived Friday, October 4th. The package came shipped in an unsuspecting white envelope, and the product was contained in a small sealable baggie. The presentation was about as bare bones as it gets, but for something this small, there’s really no need to go all out with shipping, packaging, and such.

The most important thing about the Nano SIM adapter is that everything fits as designed. Unfortunately, since I switched to Verizon service with my iPhone 5 purchase, I’m not able to 100% verify that it works. I tried placing my Verizon Nano SIM into my iPhone 4S, which is technically a world phone, but it wouldn’t work. I’m pretty sure something needs to be activated on Verizon’s end for it to pick up the signal, but didn’t bother going through the trouble. If this were an AT&T SIM card, I’m pretty confident that it would have just worked.

If you’d like to have your very own Nano SIM adapter, then head over to Amazon, and pick one up on the cheap. The one I purchased can be had for less than five bucks plus shipping. You might never need it, but this is a good thing to have in your tool chest for those “just in case” scenarios, don’t you think?