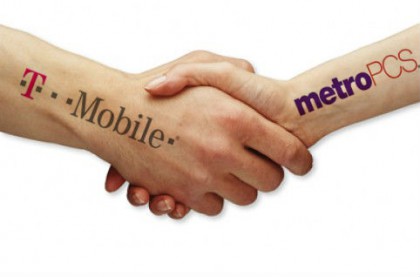 Sprint executives must be consuming antacids by the barrel about now. Not only is the carrier a mere footnote when U.S. wireless providers are mentioned, but today’s agreement between T-Mobile and MetroPCS could put on life-support Sprint Nextel’s only real market: inexpensive prepaid cell service.

Until today, when the two carriers announced they’d merge, T-Mobile was known as the carrier without an iPhone and was left at the altar after a marriage to AT&T was derailed by federal regulatory concerns. As for Metro-PCS, it was a regional carrier barely on anyone’s radar. Now, however, the combined companies (if the merger is approved) will boast 43 million subscribers, closing in on Sprint’s 56 million…

What’s more, T-Mobile has long lagged other carriers in 4G LTE, a sure selling point to win Apple’s attention and the much desired smartphone. MetroPCS has been knee-deep in 4G LTE for more than two years. For its part, the regional carrier gains access to T-Mobile’s national network.

But perhaps most worrisome for Sprint, is the executives behind the T-Mobile/Metro PCS deal are virtually chomping at the bit to dominate prepaid services. Indeed, the CEO of T-Mobile USA’s German parent is a huge fan of prepaid.

“It’s a great business,” Deutsche Telekom CEO Rene Obermann told reporters. “I like prepaid because it’s the fastest growing part of the industry.” Which is true. Postpaid has matured to the point where any movement is in churn — the percentage of subscribers who jump to another postpaid carrier. Also, since AT&T and Verizon have the postpaid market tied up, the only wiggle room for other carriers is prepaid.

T-Mobile USA’s CEO, John Legere was equally excited about the prepaid prospects. “This deal will allow us to win in no-contract services,” he told reporters. Indeed, prepaid was a bright spot compared to postpaid. When T-Mobile announced its second-quarter results, the company said it lost 557,000 postpaid subscribers but gained 227,000 prepaid customers.

Enter the iPhone. Once Apple shied away from offering the smartphone to prepaid customers. However, many of T-Mobile’s prepaid gains are thought to be unlocked iPhones. Imagine what the gains would be if T-Mobile could offer 4G LTE, rather than 3G?

In one of those twisted corporate ironies, Sprint almost bought MetroPCS, but the deal was nixed by board members worried the carrier’s bank account was already stressed out over the costs of offering the iPhone, according to CNet.

What do you think? Can Sprint survive the T-Mobile MetroPCS merger?