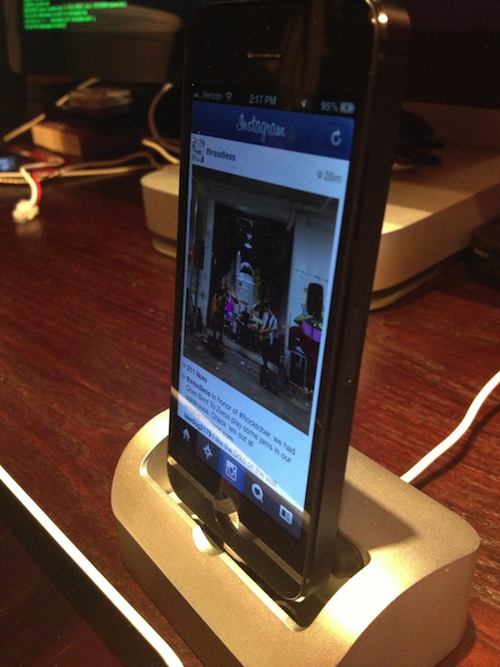 Since the iPhone 5 launched two weeks ago with its new Lightning port, accessories have been extremely scarce. Lightning to USB cables alone have been hard to find, never mind docks and other add-ons.

Thus, we imagine we’ll be seeing a slew of do-it-yourself solutions pop up over the next few months. In fact, one has already surfaced involving an Elevation Dock, some hacking and a Lightning USB cable…

For those of you not familiar with the Elevation Dock, it’s a 30-pin charging dock that made headlines earlier this year after it raised nearly $1.5 million through Kickstarter. And if you have one, and recently purchased an iPhone 5, you might want to check this out.

The Next Web points to a new mod for the Elevation Dock which involves replacing its 30-pin dock connector with a Lightning one. Oliver Nelson, the creator, says it takes about 25 minutes and some light hacking.

Then I super glued the lightning adapter into the sleeve raised approx. 2mm above the top of the sleeve (enough room to make a tight fit for turn the cable out the back of the dock). Then the screw in retainer needed a touch of filing to clear the bottom edge of the lightning cable.  I then screwed down the retainer and screwed the back onto the dock and let it dry a bit.  Voila!”

It’s not a perfect solution, but it should at least tide you over until real Lightning-compatible docks start surfacing, or until ElevationLab releases its own bolt-in Lightning adapter, which it says is in the works.

Unfortunately, there’s no telling when this will be. Apple itself has said that it has no plans to make an iPhone 5 dock, and it has recently tightened the terms for third-party accessory manufacturers, which will obviously slow them down. So right now, it either looks like its do-it-yourself solutions, or nothing.