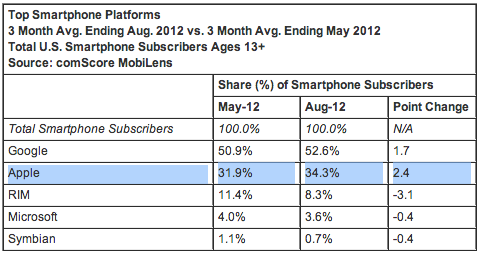 Analytics firm comScore is out with new research data concerning the mobile landscape in the United States during August. Good news for Apple: the iOS is on the rise among smartphones, going from 31.9 percent during the three-month period ending in May 2012 to 34.3 percent in June, July and August.

Note that the observed timeframe covers the three month period ending August 31, just before the iPhone 5 launched and as a ruling awarded Apple with $1+ billion in damages in the Apple v. Samsung suit. 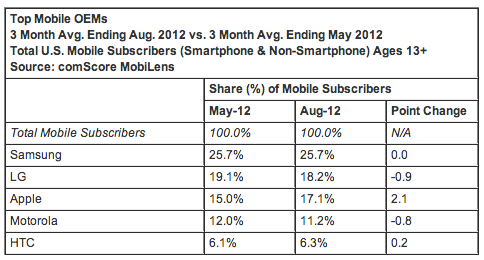 Apple is now after second-ranked LG.

What’s really interesting is that Samsung’s growth was flat, due to slowing sales in feature phones (via Localytics) and because would-be buyers likely withheld their purchases to see what the new iPhone would be about.

Matter of fact, of all the top five branded vendors only Apple gained meaningfully as everyone else dropped notably. HTC’s +0.2 percentage point change is probably a rounding error.

Note that comScore’s data takes into account only smartphones.

Considering tablets only, another survey published today suggests that the iPad now has just over half of the US tablet market, a decrease from the 80+ percent market share a year ago.

So much about analysts claiming that Amazon’s new Kindle Fire cannot put a dent in Apple’s commanding lead.

Now, you may wonder, “gee, how come that the Android platform’s overall 1.7 percentage points growth is not reflected in vendor breakdown”.

One likely explanation is that much of Android’s growth came from non-branded Android cheapos coming out of Asia, helping Google put out impressive numbers.

RIM is a sad, sad story.

As noted by The Loop‘s Jim Dalrymple, “it’s one thing to lose ground to iOS and Android, but when Windows Phone OS catches you, you’re done”.