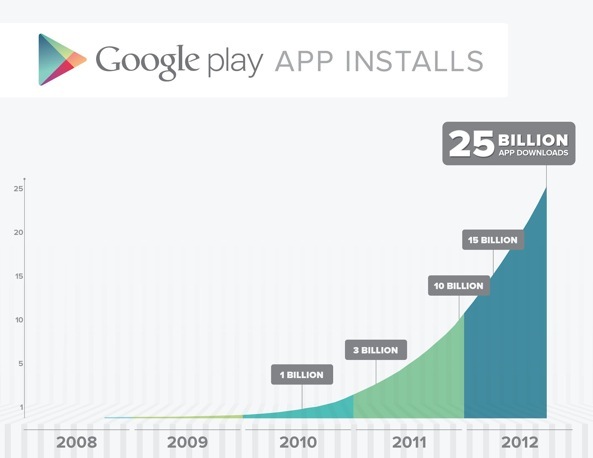 Google is creeping up on Apple, announcing yesterday on its Android blog that its Play Store now has 675,000 apps which have been downloaded 25 billion times. It was just recently that Google bragged about half a billion cumulative Android activations and on September 5 the search Goliath announced it was activating 70,000 tablets and 1.3 million Android devices each day.

At this rate, Google should have no trouble surpassing Apple’s platform by year’s end. By comparison, Apple’s App Store carried over 750,000 apps and the company sold a total of 425 million iOS devices, as of September 12. The iPhone maker said earlier at WWDC that customers downloaded over 30 billion apps as of June…

By the way, the App Store reached the 25 billion mark seven months before Google, in early March.

From the official Android blog:

Twenty-five billion is more than twice the distance, in miles, that the Voyager 1 spacecraft has travelled since its launch 35 years ago. It’s the amount of time, in minutes, that have passed since some of our earliest ancestors began to set foot in Europe.

Celebrating the milestone, Google is now offering notable app discounts for the next five days. The $0.25 sale includes popular apps and games from the likes of Gameloft, Electronic Arts, Rovio, runtastic, Full Fat and more.

There’s no doubt that Google is now looking to pass the App Store and will brag about the achievement.

At the rate of 1.3 million daily Android activations, Google should pass Apple in a few months time.

Quantity is important, but quality beats quantity any time.

Android people are more reluctant to pay for quality as the platform embraces the ad-supported, free-everything mantra.

Per Forrester Research,  iOS app users are typically young and what you could call wealthy, as opposed to their Android counterparts which skew older.

i guess you could say that people stick with the iOS platform because it has far better and prettier apps than those offered on Android.

Would you agree with such an assessment?