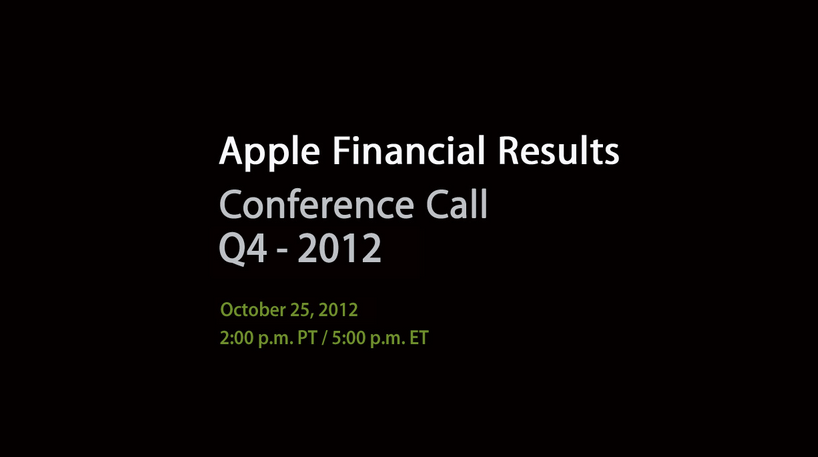 Club Cupertino is set to release fiscal 2012 fourth-quarter earnings on Thursday, October 25, 2012. Data covering the three-month period ending September 30 will also include the first iPhone 5 update since the five million opening weekend sales milestone. Apple’s fourth-quarter guidance calls for revenues of about $34 billion and diluted earnings per share of about $7.65. Also, this…

We are now pretty sure that invitations for an alleged iPad mini media event are reportedly going out on Wednesday, October 10.

If true, then the presser will probably take place the following week, with the device hopefully going on sale that Friday or the week after, on October 26.

In turn, Apple gets to boast blowout (or some such) iPad mini sales in both earnings release and on the conference call.

Apple also said those interested will be able to listen to the call on Thursday, October 25.

The call will be provided as streaming audio requiring the iPhone, iPad or iPod touch running iOS 4.2 or above, any Mac running OS X 10.5 or above or any PC running QuickTime 7 or later.

Helping Apple’s Q4 numbers will also be the new MacBook Pro with Retina display, which was released at WWDC on June 11 alongside refreshed MacBooks and Airs.

However, AAPL took some beating lately over the ongoing controversy surrounding iOS 6 Maps, which has resulted in a CEO apology and unusual recommendation of third-party Maps alternatives “while we’re improving Maps”.

Investors punished the stock which hit $659.39 in after-hours trading.

At the same time, GOOG is on fire and in early trading this morning passed MSFT, pushing Google ahead as the second most-valuable company, behind Apple.